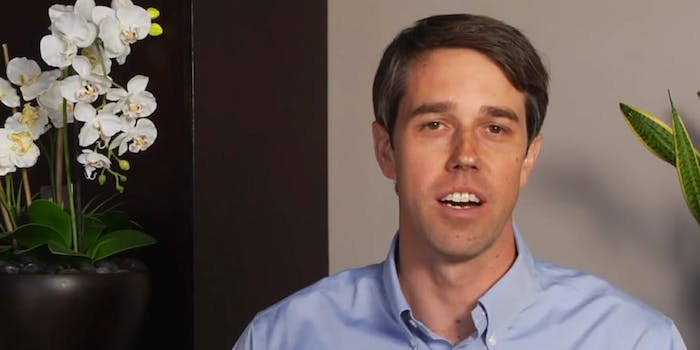 The remarks were made in a review he wrote in 1991.

Beto O’Rourke, the Democratic Senate candidate hoping to unseat Sen. Ted Cruz (R-Tx.), has apologized for making “disrespectful and demeaning comments about women” in a review of a Broadway play in 1991.

O’Rourke, then 19, made the comments when writing for the Columbia Daily Spectator, the student newspaper at Columbia University. In his review for “The Will Rodgers Follies,” O’Rourke refers to actresses in the play, adding that their “only qualifications seem to be their phenomenally large breasts and tight buttocks.”

The review was printed in the Oct. 10, 1991 edition of the Columbia Daily Spectator.

O’Rourke apologized for the comments in a statement to Politico, who noted that the remarks were “flagged to Politico by a person who opposes O’Rourke’s Senate campaign.”

“I am ashamed of what I wrote and I apologize. There is no excuse for making disrespectful and demeaning comments about women,” he told the news outlet.

The race between O’Rourke and Cruz to represent Texas in the Senate has become one of the most-watched races leading up to the 2018 midterm elections.

In the past several weeks, the Cruz campaign has been criticized for misrepresenting remarks his Democratic challenger made about flag burning and released an attack ad claiming he cursed too much. The Texas GOP Twitter account also tried to drum up support by posting an old mugshot of O’Rourke, but found that numerous people online thought he was attractive.

Over the weekend, the Democratic Senate candidate joined musician Willie Nelson on stage and sang “On the Road Again.”

Real Clear Politics shows that, on average, Cruz leads the Democrat by 4.5 percent with just over a month to go ahead of the midterm elections.