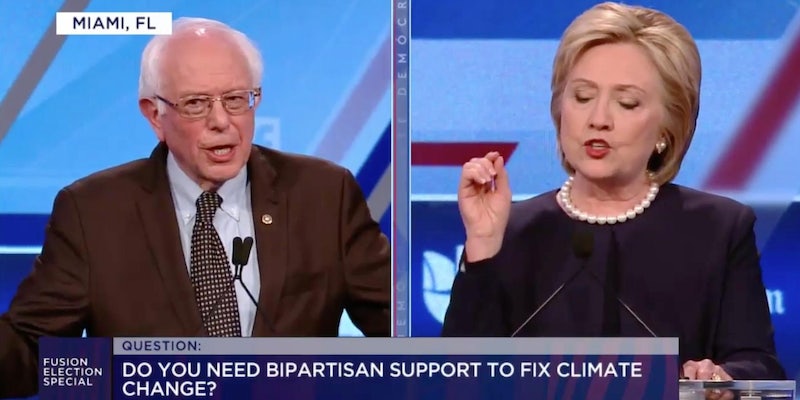 The 9 best moments from the Democratic debate in Miami

Here are all the highlights from Tuesday's debate in Miami, Florida.

One day after Vermont Sen. Bernie Sanders‘s major upset win over former Secretary of State Hillary Clinton in the Michigan primary, the two Democratic candidates returned to the debate stage to duke it out once again.

Here are the highlights:

1) Clinton was still getting asked about her emails

It’s not much of a surprise, considering the FBI investigation into the matter remains ongoing.

when u get asked about ur emails (again) #DemDebate pic.twitter.com/u8UcBf2X1P

2. But she wouldn’t talk about the possibility of an indictment

Hillary initially refused to answer the question of whether she would drop out if she was indicted, but she was pressed again by a debate moderator.

“If you get indicted would you going to drop out?” moderator Jorge Ramos asked. Clinton responded, saying, “Oh, for goodness—that’s not going to happen. I’m not even answering that question.”

3) Sanders took his finger-wagging to the next level

5) Sanders called out Wall Street, as Sanders is wont to do

How does it feel now, @BernieSanders? #DemDebatehttps://t.co/goYwyCPKoL

7) Sanders called out his Brooklyn accent

8) Sanders made Clinton a challenge

3rd most-Tweeted moment for #DemDebate: Sanders: "Madam Secretary, I will match my record against yours…" https://t.co/T7GstHHDsr

9) On Twitter, Sanders and Clinton split the chatter almost down the middle