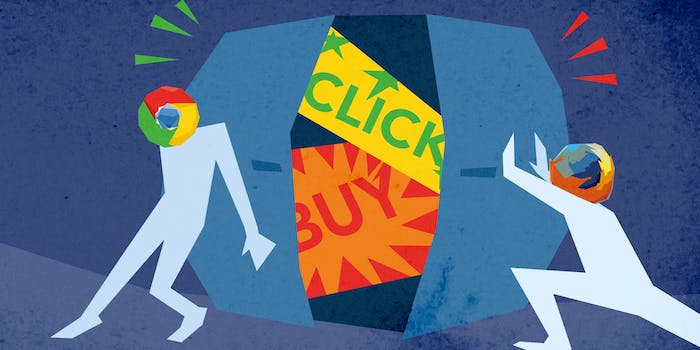 The ad blockers publishers don’t want you to know about

No one likes ads. At least not the way people like Stranger Things or Pokémon Go.

Ads are—unfortunately—everywhere, especially on the internet—and they’re what keeps the lights on at most online publications (the Daily Dot included!).

Online advertising in recent years has only grown in sophistication and reach. Whether they’re pop-ups, banners or those creepy cookie-enabled ads that guarantee that Oregon Trail card game you were eyeing once will be following on every site you visit for weeks, most people agree that ads are pesky.

Nearly a quarter of people use an ad blocker on their desktop and 15 percent use ad blockers on their smartphone, according to a study released this July by the Interactive Advertising Bureau. Ad blockers have also grown more advanced and include several privacy features. You can block third-party tracking cookies, block ads on YouTube and in your email, and whitelist ads on certain sites (insert :wink: emoji here).

Several free and paid options for ad blockers exist, including browser extensions and apps specifically for your smartphone or tablet. Even if you have a decent ad blocker installed, keep in mind that a few stubborn ads may unfortunately still float to the surface. Yahoo and more recently Facebook have grown increasingly aggressive in stopping  ad blocking software.

That said, here’s a breakdown of the best ad blockers on the market.

Adblock Plus is one of the most widely used ad-blocking options for your desktop. The free browser extension works on Chrome, Internet Explorer, Firefox, Safari, and even Opera. It allows users to create external filter lists to specify which aspect of a website they want to block. You can block all ads, malware, or allow some non-intrusive ads. You can also stop social media sites like Facebook, Twitter, and Google Plus from tracking your reading and sharing habits. You can even use Adblock Plus to block flash and get around the paywalls of some sites.

One of the notable downsides of Adblock Plus is that it allows companies to pay to squeak past its ad blockers. Companies like Google, Amazon, and Microsoft have already paid up, according to  The Financial Times.

But there’s a rather big upside to counter that: Adblock Plus stands out as being the only program that continues to allow users to block ads on Facebook. In response to Facebook’s recent decision to avert ad blockers, Adblock Plus released a new filter on Thursday that will re-block ads on the social network.

Adblock Plus is also available as an app for  iOS and Android. 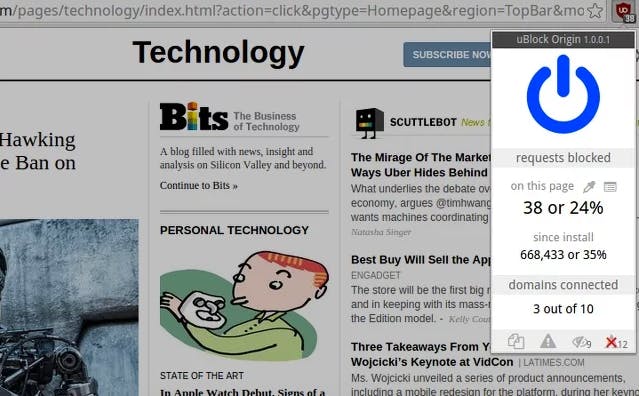 Available for both Chrome and Firefox, uBlock Origin is a free, open-source app that promises to cut back on your use of CPU and memory through blocking ads and tracking. It functions more as a general purpose blocker than merely an ad blocker; the extension blocks all third-party network requests by default. It’s a lot less memory-heavy than many of the popular ad blocking extensions, including Ad Block Plus and Ad Guard. You can customize your own list of ads to block, whitelist certain sites, and also select from user-created lists of servers and trackers to block. uBlock Origin is a bit more detailed than Ad Block Plus, which could be overwhelming for some users.

Disconnect is a browser extension focused on privacy. The extension shuts down third-party ad-tracking technology on social media and other websites. Disconnect also categorizes the elements it blocks so you can see exactly what you’re blocking—whether it’s advertising, a social widget, or an analytics tool. The free version of Disconnect allows you to protect a single browser and search privately. Paid options allow more advanced encryption options, including secure Wi-Fi and a VPN.

Disconnect is also available as an app for iOS and Android.

1Blocker is a doozy of an all-purpose content blocker that can block ads, fonts, share buttons, trackers, social media widgets, adult sites, Disqus comments—you name it. It uses WebKit Content Blockers that block content before it’s actually downloaded, which cuts down on page loading times and bandwidth. 1Blocker contains 38,000 pre-installed blockers and also allows you to customize your own lists. The free version allows you to block one group of elements (i.e. ads or trackers), but the premium $2.99 version lets you access all of its features.

1Blocker is only available as a browser extension for Safari and as an app for iOS devices.