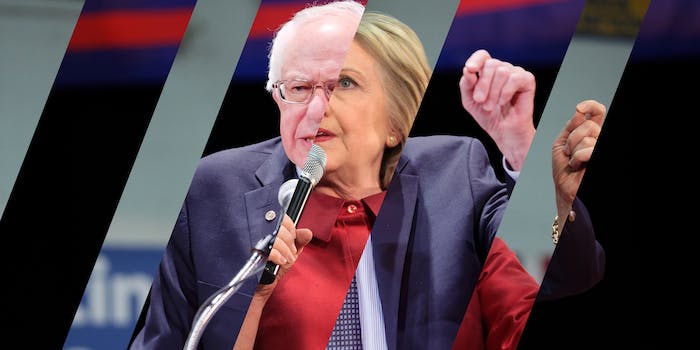 The bern is wearing off.

At the Democratic National Convention on Monday night, many loyal Bernie Sanders supporters were brought to tears as the Vermont senator threw his support behind presumptive Democratic nominee, Hillary Clinton.

But despite many supporters’ claims of “Bernie or Bust,” new research shows that 90 percent of consistent Sanders supporters favor Clinton over her opponent, Donald Trump, in the November election.

Throughout the course of the survey, conducted by the Pew Research Center, the reports shows 44 percent of Democratic voters changed preferences at least once. In March 2015, 10 percent of Democratic voters wanted Elizabeth Warren to win the nomination. But after Warren announced that she was not entering the race, 56 percent of her supporters backed Sanders as their first choice, while only 12 percent supported Clinton.

Furthermore, even though Clinton consistently led Sanders in delegate count, her share of consistently loyal supporters was low. The poll shows that 20 percent of Democratic voters picked Sanders as their top choice in every survey, while only 15 percent consistently named Clinton their first choice going back to March 2015.

However, Nate Silver, a FiveThirtyEight statistician who predicted in late June that Clinton has a nearly 80 percent chance of winning the presidency over Trump, said the Pew poll may be misleading.

According to Silver, the 90 percent of Sanders supporters who prefer Clinton over Trump is the number you get when voters are forced to choose between the two. However, many Sanders supporters have thrown their support behind Green Party candidate, Jill Stein—although Sanders himself advised his fans not to vote for a third party—or remain undecided.

A video by Mother Jones further proved the November election isn’t black and white. In asking die-hard Sanders supporters who they plan on voting for in November, some offered their grudging support of Clinton, while others said they’d vote for Trump.

“I am so anti-Hillary,” LaShanda Parker, who considered voting for Trump over Clinton, said. “Pick your poison. Do you want to get shot in the foot, or in the head?

However, former Pennsylvania Gov. Ed Rendell says he believes Democrats will eventually swallow their pride and vote for Clinton.

Last week, the Republicans were polled for similar research. Of the 44 percent of the party that never supported Donald Trump, 79 percent plan on voting for him in the general election.