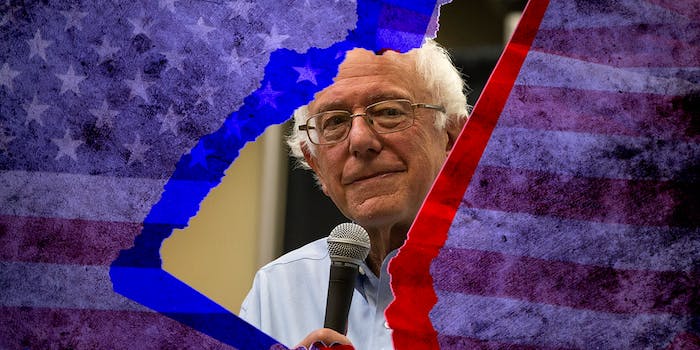 At 37 percent reporting, Sanders led Clinton by nearly points, earning more than 58 percent of the vote.

“Together, we have sent a message that will echo from Wall Street to Washington, from Maine to California,” Sanders said during his victory speech. “And that his, that the government of our great country belongs to all of the people and not just a handful of wealthy campaign contributors and their super PACs.”

Sanders was expected to win in New Hampshire, which neighbors his home state of Vermont. Going into Tuesday night’s primary, Sanders led Clinton by an average of more than 13 points, according to Real Clear Politics.

New Hampshire is not a “winner takes all” state, meaning each candidate will be awarded a portion of the delegates at the Democratic national convention, which kicks off on July 25.

This is how @BernieSanders is celebrating right now pic.twitter.com/A2oBa3iJfo

With a primary win under his belt, the real challenge now begins for Sanders, who trails Clinton in the next states to vote, South Carolina and Nevada, by double digits.

Sanders has closed in on Clinton’s substantial lead in national polls, and his win in New Hampshire stands to help further his fundraising efforts to get out the vote in forthcoming primaries and caucuses.

The real test will arrive on March 1, Super Tuesday, when a dozen states cast their votes. The outcome of those races will likely make or break his campaign.

The next Democratic votes of the 2016 election will take place in Nevada on Saturday, Feb. 20. Nevada’s Republican primary is Tuesday, Feb. 23.

Photo via Phil Roeder/Flickr (CC BY 2.0) | Remix by Max Fleishman