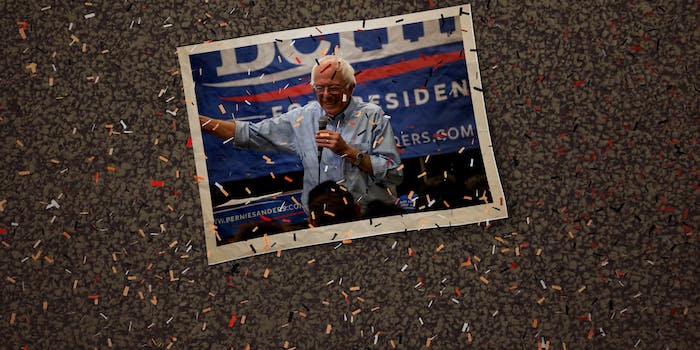 The odds are in Clinton's favor, but many people are still feeling the Bern.

You may have heard that the race for the Democratic presidential nomination is over. But there are more than 20,000 reasons not to believe it.

On Monday night, an estimated 21,000 people turned out in Sacramento, California, to hear Sen. Bernie Sanders (I-Vt.) sell his vision of a political revolution—an event that, as U.S. Uncut points out, the mainstream media largely ignored.

The enthusiasm for Sanders, who trails former Secretary of State Hillary Clinton by hundreds of delegates, calls into question the narrative that this race is all locked up.

21,000 people showed up to see @BernieSanders at his rally in Sacramento, CA today. #BernieInSacramento https://t.co/HoTxWEEJcK

I can't wait till the #CAPrimary so that Bernie shows Hillary who's the boss… #BernieInSacramento pic.twitter.com/VsOQMxiUA2

17k in Sacto tonight and another 10K trying to get in! Bernie at home in #CaliforniaPrimary #BernieInSacramento pic.twitter.com/EMPc8JO2o9

Including superdelegates, who may switch their allegiance at any time, Clinton leads Sanders by 774 delegates and sits just 155 total delegates beneath the 2,383 figure needed to secure the party’s nomination, according to the Associated Press tally.

In short, the math is not in Sanders’s favor. But that doesn’t mean he can’t win—and it definitely doesn’t mean Sanders is giving up.

Twelve primaries remain in the Democratic contest, with 1,038 delegates still available, including 29 that will be awarded Tuesday night in West Virginia. Sanders is expected to do well in many of the remaining primaries and caucuses.

Democratic Party rules dictate, however, that delegates are divided proportionally, meaning that Sanders must win by large margins to cut into Clinton’s delegate lead, let alone surpass her or deny her the remaining delegates she needs to lock up the nomination. Regardless, Sanders has vowed to stick around and fight.

“If we can win here in New Jersey and win in California and win in some of the other states, and if we can win a majority of the pledged delegates, we’re gonna go into Philadelphia and the Democratic convention and expect to come out with the Democratic nomination,” Sanders told a crowd in Atlantic City, New Jersey, earlier this month. “So … don’t let anybody tell you this campaign is over. We’re gonna fight for the last vote we can find in New Jersey and California.”