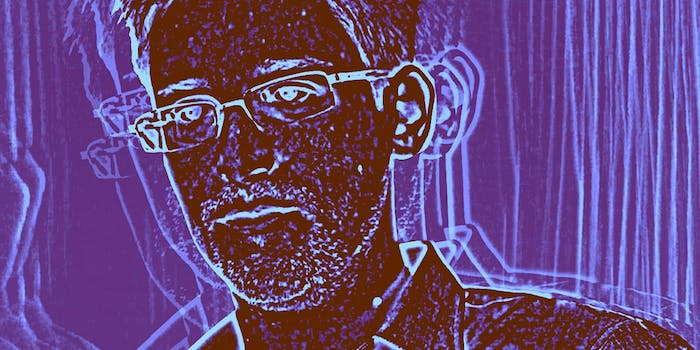 The leading Democratic candidates for president got down and dirty on surveillance and blame.

The five leading Democratic candidates drew lines in the sand Tuesday night, firmly establishing their respective views on the National Security Agency and its famous whistleblower who stands wanted by the Justice Department, Edward Snowden.

Spoiler: Among the five of them, Snowden has about one-and-a-half friends.

Almost two hours after the debate began, host Anderson Cooper asked Lincoln Chafee, former senator from Rhode Island, about his decision to vote for the Patriot Act in 2001, in the immediate aftermath of 9/11—and, subsequently, for “the NSA program.” That was a nod to Section 215 of the act, which was quickly used as justification for the agency’s program to track American phone records in bulk.

Chafee largely pleaded ignorance. “That was another 99-1 vote,” Chafee responded. “It was seen as, at the time, modernizing our ability to do what we’ve always done: to tap phones, which always required a warrant… as long as you’re getting a warrant, you should be able to do surveillance.”

Arguably the most controversial aspect of the program Snowden opposed is that the NSA did get a court order to collect Americans’ phone metadata in bulk. It was just conducted by the classified FISA Court, and thus happened without most people knowing about it.

“Section 215 started to get too broad and too far,” Chafee continued. “So I would be in favor of reforming [it].”

Former Secretary of State and New York Sen. Hillary Clinton, who also voted for the Patriot Act at the time, on the other hand, didn’t mince words. “No, I don’t [regret my vote],” she said. “I think that it was necessary to make sure we were able after 9/11 to put in place the security that we needed. And it is true that it did require that there be a process. What happened, however, is the Bush administration began to chip away at that process.”

But according to a 2009 NSA memo, also leaked by Snowden, the NSA took almost immediate action after 9/11, starting a basic phone metadata program within three days and getting Americans’ phone records in bulk in months.

Cooper then asked Vermont Sen. Bernie Sanders, the sole senator to vote against the original Patriot Act, if he would “shut down the NSA surveillance program.” Again, that’s an apparent nod to the program that collects Americans’ phone records in bulk, as the NSA is an extremely sophisticated signals intelligence agency and has a number of programs. That, it’s worth noting, is something of a moot point. Thanks to the USA Freedom Act, which passed earlier this year (and which Sanders voted against, saying it didn’t go far enough), that program is winding down and is scheduled to expire permanently in November.

“I would shut down what exists right now,” Sanders replied. “Virtually every telephone call in this country ends up in a file at the NSA. That is unacceptable to me. But it’s not just government surveillance. I think the government is involved in our emails, is involved in our websites. Corporate America is doing it as well. If we are a free country, we have the right to be free. Yes, we have the right to defend ourselves against terrorism, but there are ways to do that without impinging our constitutional rights and our privacy rights.”

Cooper then got blunt with the candidates about Snowden, asking if they considered him a traitor or a hero.

Clinton went the other direction. “He broke the laws of the United States,” she said. “He could have been a whistleblower. He could have gotten all of the protections of being a whistleblower. He could have raised all of the issues he has raised. And I think there would have been a positive response to that. In addition, he stole very important information that has unfortunately fallen into a lot of the wrong hands… I don’t think he should be brought home without facing the music.”

Former Maryland Gov. Martin O’Malley agreed. “Snowden put a lot of Americans’ lives at risk,” he claimed. “Snowden broke the law. Whistleblowers do not run to Russia and try to get protection from Putin.”

After first leaking the documents in a hotel in Hong Kong, Snowden was laid over in Moscow, trying to fly to Latin America, when the U.S. charged him, effectively stranding him. He later applied for and received temporary asylum from Russia.

Sanders, however, stuck with considering Snowden played a vital role for reform. “I think Snowden played a very important role in educating the American people to the degree in which our civil liberties and our constitutional rights are being undermined. He did break the law, and I think there should be a penalty to that. But I think what he did in educating us should be taken into consideration.”

Former Virginia Sen. Jim Webb had a similar sentiment. “I would leave his ultimate judgement to the legal system,” he said. “Here’s what I do believe. We have a serious problem in terms of the collection of personal information in this country,” referencing previous legislation he’d introduced to require government agencies to destroy certain information secretly collected on individuals if it doesn’t result in criminal charges.