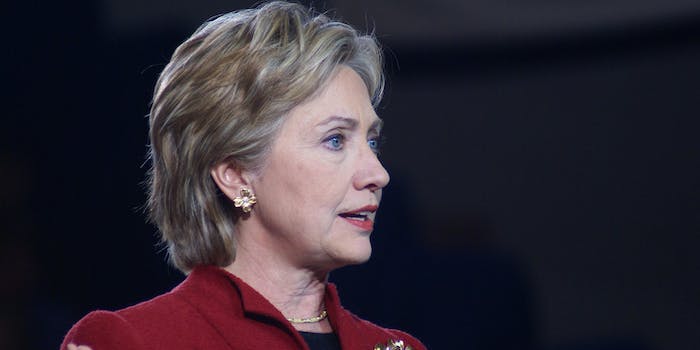 It's her third win of the night.

While South Dakota awards just 20 pledged delegates—California, where voters are also casting ballots on Tuesday, has 475—Clinton’s’s victory adds another drop of drama to an increasingly contentious Democratic race.

On Monday night, the Associated Press and NBC News called the race for Clinton after surveying superdelegates, party elites who remain unbound until they cast their ballot at the Democratic National Convention in July.

Going into Tuesday night’s contests, Clinton led Sanders in pledged delegates 1,812 to 1,521, according to the Associated Press, which confirmed support of Clinton’s 571 superdelegates, pushing the former secretary of state over the 2,383-delegate threshold.

Including her wins in New Jersey and New Mexico, Clinton has so far secured an additional 101 delegates, bringing her total to 1,913—more than the majority of Democratic delegates—as of 11pm CT, June 7. The California race, with 475 pledged delegates at stake, remains too close to call at the time of publication.

Despite Clinton becoming the presumptive Democratic presidential nominee, Sanders has vowed to stay in the race until the party convention, which begins July 25.

The Sanders campaign says it will attempt to win over Clinton delegates in an attempt to receive the Democratic nomination.