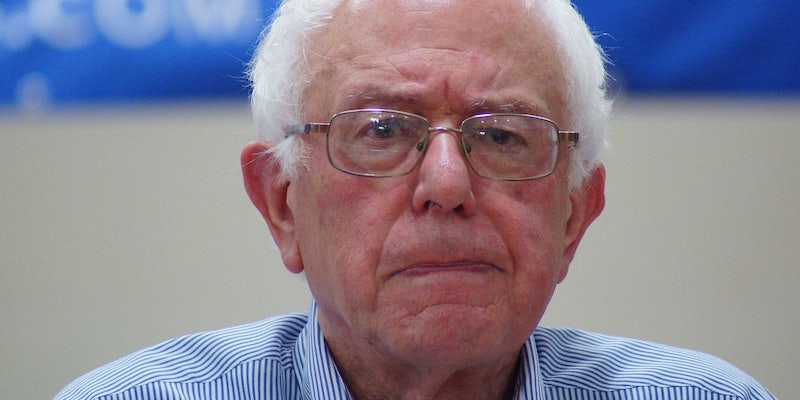 Bernie Sanders' campaign has threatened to take the DNC to court.

The Democratic National Committee has suspended the campaign of Bernie Sanders from accessing a key voter database after a glitch in the software allowed at least one staffer to view data belonging to Hillary Clinton‘s campaign.

It remains unconfirmed, however, whether the staffer inappropriately accessed Clinton’s data.

The move by the DNC, first reported by the Washington Post, has sparked an outcry among Democrats who believe the party is purposefully sabotaging Sanders, an Independent senator from Vermont, who trails former Secretary of State Clinton in the polls but remains wildly popular among an increasing base of voters.

With just six weeks before the Iowans deliver the first votes of the 2016 election on Feb. 1, the decision by the DNC to ban Sanders access to voter data delivers a major hit to the senator’s campaign.

The Sanders campaign quickly alerted the DNC to the glitch and the unauthorized access. The staffer who accessed the data was fired.

The problem stems from the software used by the campaigns to access lists of voter data. The database contains a master list of voters maintained by the DNC, but campaigns can also add data they’ve independently collected.

Created and maintained by NGP VAN, a campaign technology company, the software is meant to have access controls that block campaigns from viewing each other’s proprietary data. Because of a technical problem, the access controls reportedly failed, allowing a Sanders campaign staffer to allegedly access Clinton’s data.

The Sanders campaign quickly alerted the DNC to the glitch. The staffer who allegedly accessed the data, Josh Uretsky, was fired.

Speaking with CNN, Uretsky denies any wrongdoing, saying instead that the campaign was simply investigating a data breach.

“We knew there was a security breach in the data, and we were just trying to understand it and what was happening,” Uretsky told CNN, adding, “To the best of my knowledge, nobody took anything that would have given the [Sanders] campaign any benefit.”

“Sadly, the DNC is relying on an incompetent vendor who on more than one occasion has dropped the firewall between the various Democratic candidates’ data,” Weaver told the Post in a statement.

The DNC explain its decision to punish the Sanders campaign, telling the Post in a statement that it is “working with our campaigns and the vendor to have full clarity on the extent of the breach, ensure that this isolated incident does not happen again and to enable our campaigns to continue engaging voters on the issues that matter most to them and their families.”

A MoveOn.org petition, launched after news of the Sanders suspension broke, demands that DNC Chair Debbie Wasserman Schultz return the campaign’s access to the voter database. The petition has gained more than 73,000 signatures, at the time of publication, with more pouring in each moment.

The Sanders campaign is expected to address the situation at a press conference at 1pm ET.

“The DNC, in an inappropriate overreaction, has denied us access to our own data,” Weaver said. “In other words, the leadership of the Democratic National Committee is actively trying to undermine our campaign.”

The tension between the DNC and the Sanders campaign comes just one day before Democratic candidates take the stage for the next presidential primary debate.

Update 1:34pm CT, Dec. 18: In a statement, Sanders’ campaign threatened to seek an injunction against the DNC if the Committee fails to lift its restrictions on data access..

“We are announcing today that if the DNC continues to hold our data hostage, and continues to try to attack the heart and soul of our campaign, we will be in federal court this afternoon seeking an immediate injunction,” Weaver said in a statement emailed to the Daily Dot and other media outlets.

“What is required here is a full and independent audit of the DNC’s handling of this data and its security from the beginning of this campaign to the present, including the incident in October that we alerted them to.”