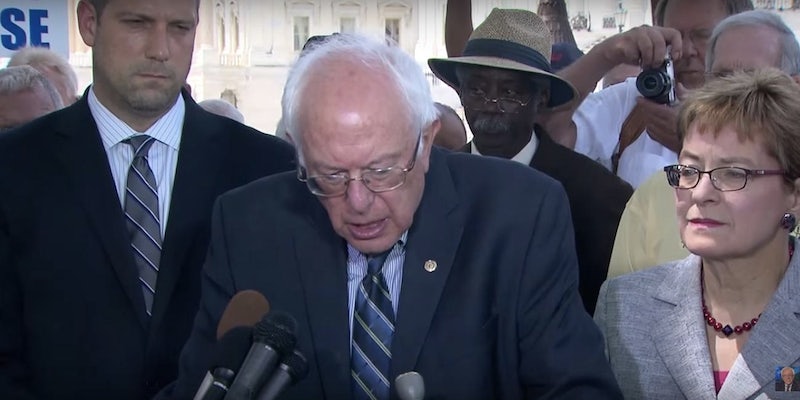 'We are very far from eradicating racism,' Sanders said.

At press briefing on Thursday, Senator Bernie Sanders called the shooting in Charleston, South Carolina, an act of terrorism and a “horrific reminder” that racism still exists in the United States.

“What transpired in Charleston, South Carolina, last night was not just a tragedy, it was an act of terror,” Sanders said in a statement.

“The Charleston church killings are a tragic reminder of the ugly stain of racism that still haunts and taints our nation,” he continued. “This senseless violence fills me, and I believe all Americans, with outrage, disgust, and with a deep, deep sadness.”

“The hateful killing of nine people who were praying inside a church is a horrific reminder that while we have made in country significant progress in advancing civil rights, we are very far from eradicating racism,” Sanders added.

Sanders, a 2016 presidential candidate, reportedly postponed a planned trip to Charleston on Sunday.

“The Emanuel African Methodist Episcopal Church is one that has been attacked, burned, and rebuilt throughout its 200 year history. While their community mourns now, they will rebuild, and they will emerge stronger than before,” he said.

At morning press briefing, Charleston Mayor Joe Riley called the shooter an “evil and hateful person [who] took the lives of citizens who had come to worship and pray together.” Police Chief Gregory Mullen said that he believes the shooting was a hate crime.

“Now is the time for mourning and for healing,” Obama continued. “But let’s be clear: at some point, we as a country will have to reckon with the fact that this type of mass-violence does not happen in other advanced countries. It doesn’t happen, in other places, with this kind of frequency.”