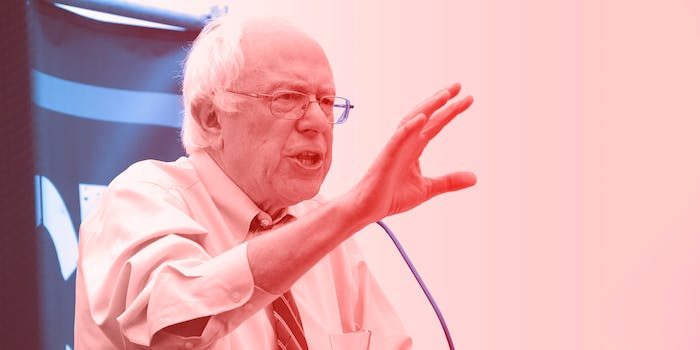 For his campaign debut, Sanders played all the hits.

Bernie Sanders, the longshot presidential candidate who’s captured the Internet’s heart, kicked off his 2016 campaign with a rousing speech Tuesday.

In his half-hour speech in Burlington, where he once was mayor, the Vermont senator hit all the issues that makes him so beloved to his base.

Here’s a quick sampling of his key points:

On the economy: “Today, we live in the wealthiest nation in the history of the world, but that reality means very little for most of us because almost all of that wealth is owned and controlled by a tiny handful of individuals.”

On Citizens United: “As a result of the disastrous Supreme Court decision on Citizens United, the American political system has been totally corrupted, and the foundations of American democracy are being undermined.”

On climate change: “It is caused by human activity and it is already causing devastating problems in the United States and around the world.”

There’s currently only one other Democrat who’s officially declared her intention to run: powerhouse Hillary Clinton, whose campaign has reportedly already raised at least tens of millions of dollars.

Photo via AFGE/Flickr (CC BY 2.0) | Remix by Max Fleishman