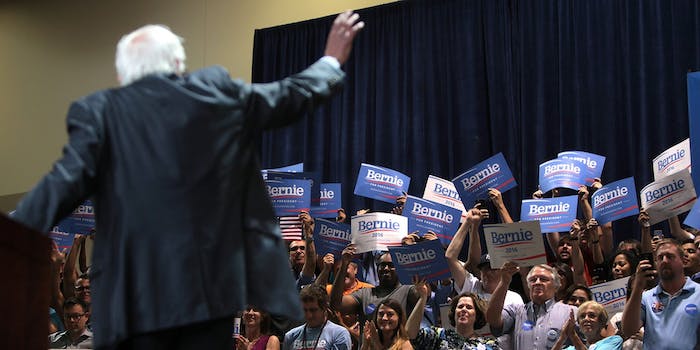 If Sanders isn't the debate's big winner, his candidacy could be in trouble.

Tuesday night might be the biggest night of Bernie Sanders‘s political life.

The independent senator from Vermont will stand shoulder-to-shoulder with frontrunner Hillary Clinton at the first 2016 Democratic primary debate, and prediction markets are betting that Sanders will benefit the most in post-debate polling.

Sanders could use a real boost, too. After a six-month long upward push, his poll numbers have stagnated in recent weeks, while Clinton has remained steady at about 40 percent, giving her double-digit lead over Sanders, who’s polling at about 25 percent, according to Real Clear Politics’ poll averages.

The CNN debate offers a valuable opportunity for Sanders to introduce himself to the large number of Democratic voters who say they don’t even know enough about him to form an opinion.

Black and Hispanic voters in particular remain unfamiliar with the independent candidate. Polls consistently show that his support among minority voters is less than half of his support among white voters, a failure that his campaign has been attempting to remedy since he began meeting with Black Lives Matters activists two months ago.

To remain a serious Democratic presidential candidate, Sanders will need to reach out to these voters in major ways during high-profile events like the debate.

CNN’s coverage of the first Democratic debate begins at 8:30pm ET. The network is streaming the event for free on its website.

Correction: An earlier version of this story incorrectly stated Clinton’s lead in the polls over Sanders. Clinton is currently polling at 17.2 points ahead of the Vermont senator.