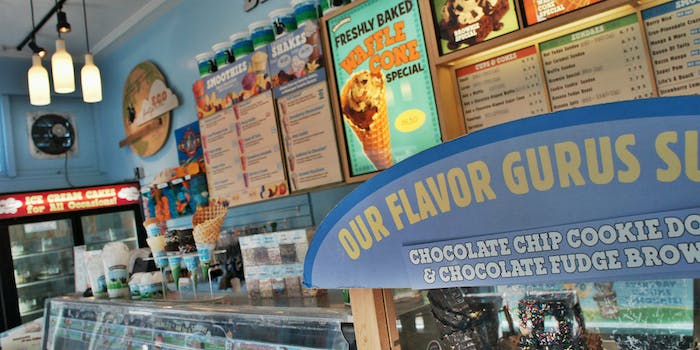 No two scoops of Chubby Hubby for you!

Want a same-scoop ice cream cone at Ben & Jerry’s? You’ll have to wait if you live in Australia. The company is officially banning all two-scoop servings of the same ice cream until the country legalizes gay marriage.

The idea is simple. Ben & Jerry’s wants to encourage customers to empathize with LGBTQ activists and push their MPs to support marriage equality. Until that happens, Australian Ben & Jerry’s will indefinitely ban any form of same-scoop servings from their shops.

“Imagine heading down to your local Scoop Shop to order your favorite two scoops of Cookie Dough in a waffle cone. But you find out you are not allowed… You’d be furious!” Ben & Jerry’s wrote in an official statement. “But this doesn’t even begin to compare to how furious you would be if you were told you were not allowed to marry the person you love. So we are banning two scoops of the same flavor and encouraging our fans to contact their MPs to tell them that the time has come—make marriage equality legal!”

We’re banning any same-flavour love in the fight for #marriageequality! Join us by signing petition to get Australia moving. pic.twitter.com/DV5MHOrCsZ

Ben & Jerry’s is also hosting post boxes in the country’s 26 stores, letting customers write postcards to their MPs that will be delivered to the Australian Parliament in mid-June.

When it comes to same-sex marriage, Australian activists have faced an uphill battle for years, and there seems to be no end in sight. Most recently, the Australian Senate considered hosting a referendum vote on gay marriage, but the measure was seen by liberals as a stalling tactic, and could possibly put restrictions on marriage itself. They instead rejected the referendum, saying Parliament could move to legalize gay marriage without a vote, especially since the majority of MPs are in favor of marriage equality. It’s unclear whether Parliament will debate the issue any time soon.