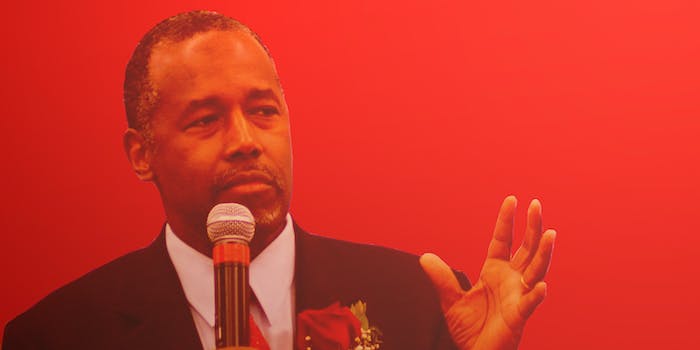 Ben Carson under fire for claims about West Point ‘scholarship’

Is the Carson campaign about to end up buried in a sarcophagus?

In Carson’s 1990 autobiography Gifted Hands, the retired neurosurgeon recounts how he was offered a “full scholarship” to the prestigious military academy. He has since repeated that claim in multiple interviews. Carson ultimately received his undergraduate degree from Yale.

When Politico looked into the veracity of the story, officials from West Point said they had no record that Carson ever applied to the school.

“In 1969, those who would have completed the entire process would have received their acceptance letters from the Army Adjutant General,” Theresa Brinkerhoff, a West Point spokesperson, told Politico. “If he chose to pursue [applying to West Point] then we would have records indicating such.”

“If he chose to pursue [applying to West Point] then we would have records indicating such.”

Carson’s claim that he was offered a full scholarship to the school is also odd because West Point doesn’t charge tuition, or room and board, to any of its enrolled students.

In an interview with the New York Times, Carson said that the scholarship offer was “informal.”

On Aug. 13, Carson responded to a question on Facebook by saying, “I was the highest student ROTC member in Detroit and was thrilled to get an offer from West Point. But I knew medicine is what I wanted to do. So I applied to only one school.”

Following publication of the Politico story, Carson’s team called the report “an outright lie” due to its implications that Carson had claimed that he had applied to West Point.

This story comes an at inopportune time for Carson, as allegations swirl around the truthfulness of statements made by the candidate, whose poll numbers have surged in recent weeks.

Another story Carson tells in Gifted Hands is how he, as a troubled ninth grader, tried to stab a classmate, but the knife blade broke when it came into contact with the fellow student’s belt buckle. Numerous media outlets have expressed skepticism when inconsistencies appeared in Carson’s retelling of the incident—which Carson himself shrugged off as inconsequential.

Of the 17 statements made by Carson that have been checked by Pulitzer Prize-winning fact-checking outlet Politifact, not a single one has been rated either “true” or “mostly true.” Three were rated “half true,” four “half true,” eight “false,” and two “pants on fire.”

Carson’s issues with making inaccurate statements is quickly becoming a dominant narrative of his quest for the White House—it’s even become a meme. On Thursday, the hashtag #BenCarsonWikipedia started trending on Twitter. The hashtag arose in response to Carson’s assertion the great pyramids of ancient Egypt were the granaries of Joseph, as described in the Old Testament story, rather than mortuary complexes of Egyptian Pharaohs—a theory that, for numerous reasons, is historically inaccurate.

Thunder is caused by God bowling.#bencarsonwikipedia

The holocaust was almost stopped by an archeologist named Henry Jones, but the Nazis froze him in carbonite. #bencarsonwikipedia

Hours after news of Carson’s potential West Point embellishment broke, Twitter users were weaving it into the #BenCarsonWikipedia, indicating that the scandal feeds into an already unfolding narrative.

Joseph told him in a TechniColor Dream that he had been accepted at West Point.#bencarsonwikipedia

It remains to be see if these recent controversies will significantly damage Carson’s standings among the Republican pack, which he currently leads by a thin margin. Many in the conservative media see this revelation as potentially fatal for his campaign.

Okay, this actually could (i.e. this will) be a problem for Ben Carson.https://t.co/WZT0l7ARYS

Correction: Ben Carson did not claim that he applied to West Point, despite his story about having been offered a “full scholarship.”