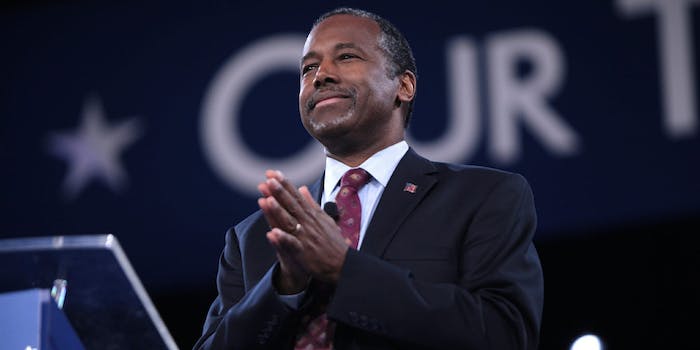 Ben Carson formally endorsed Donald Trump on Friday morning, justifying his decision to back his former rival by saying there are actually “two different Donald Trumps”—one boisterous, one brilliant.

“First of all, I’ve come to know Donald Trump over the last few years. He’s actually a very intelligent man who cares deeply about America,” Carson said during a press conference at Trump’s Mar-A-Lago resort in Palm Beach, Florida. “There are two different Donald Trumps. There’s the one you see on the stage and there’s the one who’s very cerebral, sits there and considers things very carefully. You can have a very good conversation with him, and that’s the Donald Trump that you’re going to see more and more of right now.”

Trump initially acknowledged that Carson might be right about his public and private personas.

“Perhaps there are two Donald Trumps,” Trump said. “I’m somebody who is a thinker. I’m a big thinker. I have my ideas and they’re strong and typically they’ve worked out.”

“I’m somebody who is a thinker. I’m a big thinker.”

Trump later backed off of this claim, clarifying that the Trump people see on stage simply doesn’t come across as a guy who “sits and reads and thinks.”

Carson and Trump often clashed on the campaign trail, with the evangelical Christian former neurosurgeon attacking the New York billionaire over his faith and Trump calling Carson “weak” and a liar.

I spell out some of the differences between Ben Carson and myself at 9:00 A.M. on @CNN @jaketapper. Ben is very weak on illegal immigration.

"@Robostop10: @realDonaldTrump This is not good. https://t.co/lvv0MRfgtH" WOW, one of many lies by Ben Carson! Big story.

Carson brushed aside their contentious history, saying the two had “buried the hatchet.”

“That was political stuff. And, you know, that happens in American politics, the politics of personal destruction,” Carson said. “All that is not something that I particularly believe in or anything that I get involved in. But I do recognize that it is a part of the process. We move on, because it’s not about me, it’s not about Mr. Trump. It’s about America.”

Carson’s supporters, however, are not so easily swayed. In the comments of Carson’s Facebook post about his Trump endorsement, many supporters condemned the move as unforgivable, while others thanked him for backing the former reality TV star.

Trump and the three remaining Republican presidential candidates are days away from the March 15 primaries in Ohio, Florida, Missouri, Illinois, and North Carolina, the outcomes of which could largely solidify Trump’s chances of winning his party’s nomination.

Watch Carson’s endorsement of Trump below.