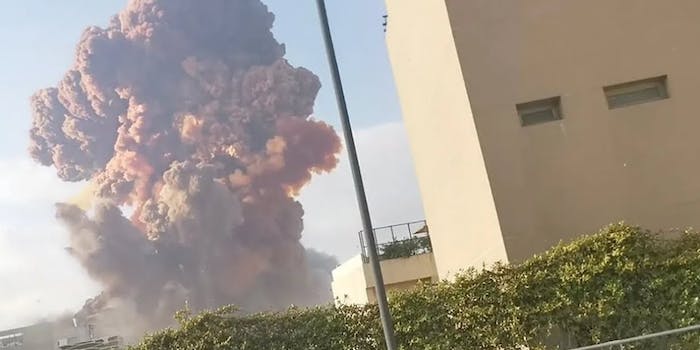 No, the explosion in Beirut was not ‘atomic’

Nuclear weapons experts tell the Daily Dot why the explosion was not 'atomic.'

A massive explosion in Lebanon on Tuesday has sparked conspiracy theories online about the origins of the blast.

Footage of the incident began to appear across social media shortly after smoke began rising over the capital city of Beirut.

The smoke quickly led to a huge explosion at the city’s main port, producing a significant shockwave and mushroom cloud in the process.

Claims immediately began flooding in attributing the explosion to everything from a missile attack to bombs planted at the scene.

Beirut explosion: What was it?

According to Lebanon’s Head of General Security, the explosion, which took place at Beirut’s main port, was caused by a fire inside a depot containing highly explosive material.

The material, which may have included sodium nitrate or ammonium nitrate, had been previously confiscated from a ship.

Despite the explanation, grandiose theories about the explosion being caused by a nuclear weapon began going viral.

In a now-deleted tweet, sports writer Chris Palmer asserted that the explosion had to have been “atomic” due to the mushroom cloud that followed.

Palmer doubled-down on the assertion even after being confronted over the outlandish claim, calling the incident a “controlled detonation.”

“The mushroom cloud forms outside of the factory. There is no question that was an atomic bomb,” Palmer says. “That is a controlled detonation. If every firework went off at the same time it wouldn’t do that. A fireworks factory exploding wouldn’t blow out windows 10 miles away.”

But none of Palmer’s claims, which were echoed by numerous accounts online, are accurate. Nuclear weapons experts speaking with the Daily Dot explained why the explosion was not in fact “atomic.”

As noted by Melissa Hanham, Deputy Director of Open Nuclear Network (ONN), mushroom clouds are not indicative only of nuclear blasts.

“A ‘mushroom cloud’ can happen any time the temperature of gas is much higher than the ambient temperature,” Hanham explained. “In this case from some of the videos you can see a round ball forming, this is because the air and chemicals are becoming super heated compared to the relatively cool air of the port.”

Ankit Panda, senior fellow in the Nuclear Policy Program at the Carnegie Endowment on International Peace, likewise stated that mushroom clouds can be observed in non-nuclear blasts.

“Just because you observe a condensation shockwave or even a mushroom-like cloud doesn’t imply that the underlying explosion is nuclear,” Panda said.

Even the coloration of the blast, according to Jeffrey Lewis, professor at the Middlebury Institute of International Studies, points to the blast being chemical in nature.

“The lack of a flash, as well as the coloration all suggest a conventional explosion,” Lewis said.

Tuesday’s explosion is far from the first of its kind. In 2011, a similar explosion took place inside the Evangelos Florakis Naval Base in Cyprus.

A fire reportedly engulfed the base’s ammunition dump where Iranian munitions, which had been seized in 2009, had been stored.

“This has happened before—we pressure states to seize arms shipments in violation of sanctions, but there is no assistance to store these things safely,” Lewis added.

The latest numbers indicate that at least 400 individuals were hurt in the blast. Homes as far as six miles away experienced damage while the explosion itself was reportedly felt as far as 150 miles away.

At least 10 people have died as a result of the blast, although the death toll is expected to rise considerably.