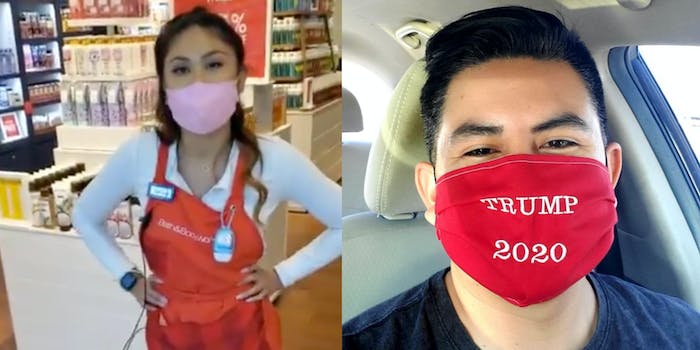 The customer filmed the subsequent confrontation.

An employee at a Bath and Body Works in Arizona is out of a job this week after cursing at a man wearing a “Trump 2020” face mask.

The incident began on Thursday as Jeremiah Cota, a strategic initiatives director for the Trump Victory Committee, was walking past the business at a shopping center in Scottsdale.

In a video posted to Twitter, Cota can be seen questioning the employee after he says she yelled, “Fuck Donald Trump.”

The employee, an alleged manager named “Karren,” confirmed after being confronted by Cota that she had in fact yelled the expletive.

“Yeah, because that’s how I feel,” Karren said.

Bath and Body Works responded soon after to Cota’s videos, which has currently been viewed over 4 million times.

“We’d like the opportunity to speak with you about your experience, Jeremiah,” the company said. “Please DM us your phone number and best time to contact you. Thank you!”

Speaking with the Arizona Republic, Trump Victory Committee spokesperson Keith Schipper stated that the company told Cota over the phone “how very sorry they were” for the incident.

Bath and Body Works reportedly went on to stress that the company “respects all beliefs.”

The company also told the Republic in a statement that the employee in question no longer worked for Bath and Body Works but did not state whether she was fired.

“We absolutely do not condone these actions as all customers should be treated with respect,” the company said.

Schipper went on to call for “more tolerance so supporters of the president don’t have to have their head on a swivel, looking over their shoulder, wondering who’s going to accost them.”