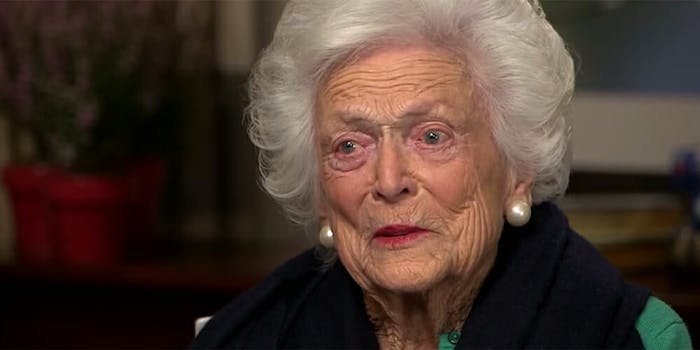 She is remembered as a matriarch with a love of literacy.

Former first lady Barbara Bush died on Tuesday, the family confirmed. She was 92.

Statement by the Office of @GeorgeHWBush on the passing of Barbara Pierce Bush this evening at the age of 92. pic.twitter.com/c6JU0xy6Vc

George W. Bush released a statement on his mother’s death.

“Laura, Barbara, Jenna, and I are sad, but our souls are settled because we know hers was. Barbara Bush was a fabulous first lady and a woman unlike any other who brought levity, love, and literacy to millions,” the statement says.

President Donald Trump, of whom the former first lady was critical, tweeted a statement saying Barbara Bush “will long be remembered for her strong devotion to country and family, both of which she served unfailingly well.”

Politicians, pundits, athletes, and other celebrities tweeted tributes to the former first lady.

Rest In Peace Mrs. Barbara Bush.
You were a beautiful light in this world and I am forever thankful for your friendship. pic.twitter.com/yuZvQ7o8aH

Rest In Peace Barbara Bush. Much love to the whole family.

Throughout her life, Barbara Bush showed us all the importance of charity, literacy, and love of country. Our thoughts are with the entire Bush family as they mourn her passing. Rest In Peace.

Barbara Bush was a remarkable woman. She had grit & grace, brains & beauty. She was fierce & feisty in support of her family & friends, her country & her causes. She showed us what an honest, vibrant, full life looks like. Hillary and I mourn her passing and bless her memory.

Barbara Bush was a woman of incredible determination, wit, and compassion who embodied America’s best values. My deepest condolences to the entire Bush family — especially her devoted husband @GeorgeHWBush.

Ohioans join with all Americans to mourn the death of Barbara Bush, a woman of grace, humility, great compassion and resolve. Her dedication to her country and family was always absolute — an example to us. We pray for her family.