Banksy filmed himself sneaking into Gaza to paint new artwork

'If we wash our hands of the conflict ... we don't remain neutral.'

World-renowned street artist Banksy released a 2-minute video on his website this week that delivers an eye-opening view of life behind the guarded walls of the Gaza Strip.

The video, “Make this the year YOU discover a new destination,” invites viewers to witness the devastation of war-torn Gaza and the tribulation of the Palestinian population cordoned within its borders.

The satirical mini-documentary, which is set to the legendary East Flatbush Project’s “Tried by 12,” presents itself as an advertisement for world travelers. It begins by showing an individual, presumably Banksy himself, entering Gaza by climbing through what’s parenthetically described as an illegal network of tunnels. “Well away from the tourist track,” the caption reads.

Exiting one of the dark tunnels, Banksy ascends into the bombed-out region and is greeted by children playing amid piles of rubble. “The locals like it so much they never leave,” the video says. Cutting to a scrum of Israeli Defense Force (IDF) soldiers, it continues: “Because they’re never allowed to.”

The video captures four of the mysterious artist’s new pieces. The first, titled “Bomb Damage,” is painted on a door defiantly erect at the facade of a destroyed building. Potentially inspired by Rodin’s “The Thinker,” it shows a man knelt over in apparent agony. Another depicts one of the Israeli guard towers along the separation wall transformed into an amusement park swing carousel. The third and largest piece is a white cat with a pink bow measuring roughly 3 meters high; its paw hovering above a twisted ball of scrap metal like a ball of yarn.

“A local man came up and said ‘Please – what does this mean?’ I explained I wanted to highlight the destruction in Gaza by posting photos on my website – but on the internet people only look at pictures of kittens.”

“This cat tells the world that she is missing joy in her life,” a Palestinian man resting nearby speaks in Arabic to the camera. “The cat found something to play with. What about our children?” 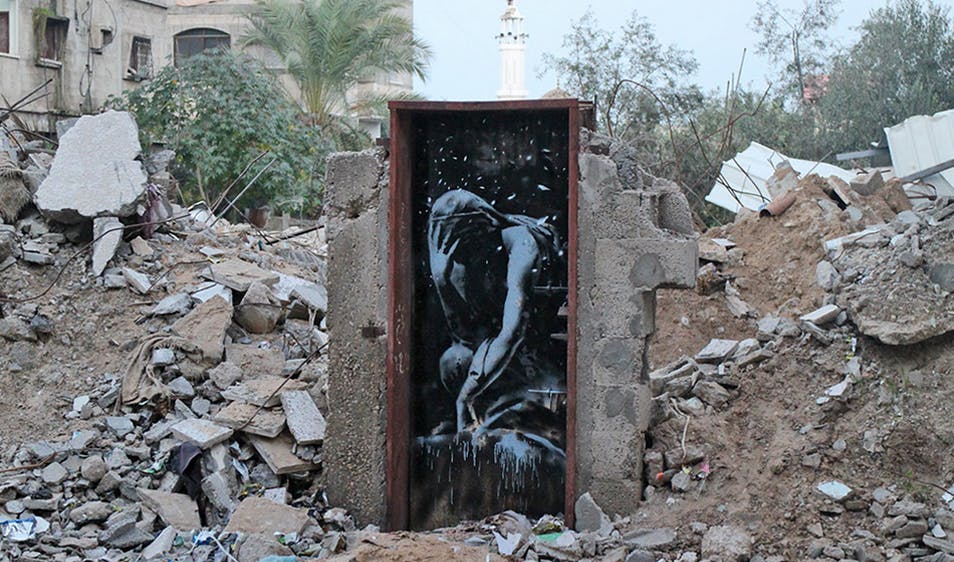 The fourth and final piece is simple red paint on a wall. It reads: “If we wash our hands of the conflict between the powerful and the powerless we side with the powerful—we don’t remain neutral.”

According to the video, much of the recorded destruction is the result of “Operation Protective Edge,” a July 2014 Israeli military campaign, the stated of goal of which was to prevent Hamas rocket fire from entering Israeli territory.

During the seven weeks of airstrikes, Gaza suffered up to 2,300 casualties, including 513 children; 66 Israeli soldiers and 5 civilians were also killed. Up to 7,000 Palestinian homes were complete destroyed, and another 10,000 severely damaged, according to the United Nations. Over half a million people were displaced by the conflict. By some estimates, rebuilding Gaza City could cost in excess of $6 billion and take more than 20 years.

Banksy isn’t new to the Israeli-Palestinian conflict. In 2005, he painted nine pieces along the 425-mile West Bank Wall, the barrier which separates Palestine and Israel.