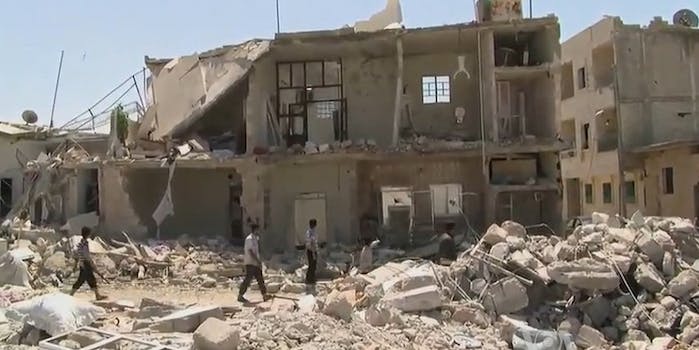 Bana Alabed, the 7-year-old Syrian girl who has tweeted the horrors she and others in Aleppo have faced for months now, narrowly escaped the latest attack from the Syrian government.

In the two months since she and her mother, Fatemah, launched the Twitter account, they have captured a first-hand look at the violence, terror, and devastation faced in Aleppo with more than 100,000 followers. She’s even befriended J.K. Rowling, who sent digital copies of the Harry Potter books her way after seeing Fatemah’s message.

My friend @jk_rowling how are you? Thank you for the book, love you from #Aleppo. – Bana pic.twitter.com/c84b4Zux0G

My brothers want to read the Harry Potters too. – Bana #Aleppo pic.twitter.com/ZW6AGggOZj

Bana took to Twitter over the weekend with a much more distressing message. One of Bana’s friends was killed by a bomb, and the attacks from the Syrian government, which captured a part of Eastern Aleppo, were getting closer to where Bana and her family lived. Fatemah begged for food to be allowed to be brought into the city for the civilians who were without it.

You see we can die anytime. This bomb is so near. I sincerely appeal to the world to save us now..- Fatemah #Aleppo pic.twitter.com/33vX7X3734

My friends. This is not cloud, this is our houses. – Bana #Aleppo pic.twitter.com/qKBNNuoyV4

Allow in food. Just allow, just…. Please allow it for the thousands starving here. Why is it a problem?. – Fatemah #Aleppo

The next day, Bana begged for help and asked her followers to pray for her.

Fatemah updated the situation on Sunday and revealed that the Syrian army had gotten through. Unaware of how much time they had left, she asked for everyone to remember the other civilians who were still in Aleppo.

Last message – under heavy bombardments now, can't be alive anymore. When we die, keep talking for 200,000 still inside. BYE.- Fatemah

The army got in, this could be our last days sincerely talking. No Internet. Please please please pray for us.- Fatemah #Aleppo

Followers received an update from Bana a few hours later. She had almost died, she told them, and her home was destroyed. She, Fatemah, and their family are now on the run with updates coming less frequently.

Tonight we have no house, it's bombed & I got in rubble. I saw deaths and I almost died. – Bana #Aleppo pic.twitter.com/arGYZaZqjg

Under heavy bombardments now. In between death and life now, please keep praying for us. #Aleppo

Message – we are on the run as many people killed right now in heavy bombardments. We are fighting for our lives. still with you.- Fatemah