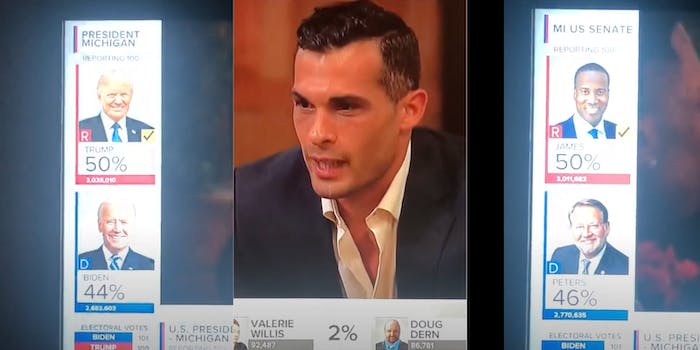 The graphic showed 100% of the vote reporting.

Of course, Election Day isn’t until Tuesday, so no results have been made available.

A mock-up graphic appeared on the left side of the screen, showing mock 2020 election results for Michigan with candidates’ faces for several races. Some were aghast, or pleased, at what they saw, depending on their political lean.

NBC executive Mike Sington tweeted: “ABC station in Detroit accidentally airs election results during ‘The Bachelorette’, including Trump winning Michigan. It was part of a test that was not supposed to be broadcast. And the look on the guy’s face drinking on the show would be the perfect reaction to these results.”

According to the graphic, with 100% of the vote reported, President Donald Trump won by 50% over Joe Biden, at 44%. However, current polling shows Biden leading Trump in the state.