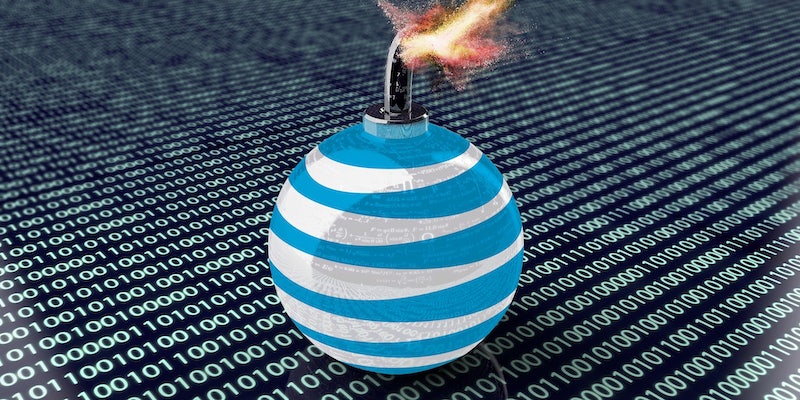 AT&T on Monday launched a new streaming service that has put the company at odds with the U.S. government and a founding principle of the internet itself.

The service, DirecTV Now, will be “zero-rated,” meaning AT&T will not count data used over the service against customers’ data caps. This favoritism on AT&T’s part that puts it on course of conflict with the Federal Communications Commission and the net neutrality rules it put in place last year.

By offering the DirecTV platform and its 100 or so channels for free, critics believe, AT&T directly threatens online video streaming competitors who simply cannot offer their services free of charge and whose service will use up a customer’s allocated monthly data count. AT&T customers are, the argument goes, more likely to use DirecTV than other video streaming, since it saves them money and gives them more choice.

Net neutrality activists are calling this unethical discrimination. In an impassioned op-ed at the Verge, managing editor T.C. Sottek explained how zero-rating gives way to what is called sponsored content, where a third-party service may choose to pay the internet service provider a toll to compete against DirecTV.

“So, for example, if Netflix wants to compete fairly with DirecTV, it would need to pay AT&T to exempt its video traffic from data caps,” writes Sottek. He adds, “AT&T can get away with this to the extent that customers won’t notice, and it’s likely that many won’t see how the strings are being pulled.”

Where, then, do the FCC’s net neutrality rules come in? Well, last year, the commission outlined safeguards to “protect and maintain open, uninhibited access to legal online content without broadband internet access providers being allowed to block, impair, or establish fast/slow lanes to lawful content.”

It’s argued by internet freedom advocates and the FCC that DirecTV’s content yields an unfair advantage over other online content. In effect, AT&T are overstepping their role as an internet service provider in creating a consumer bias to their own service by impairing customer access to other content services.

The watchdog did write a letter to AT&T this month taking issue with the new streaming service launch, but the ISP moved forward regardless, arguing that it adhered to the rules.

Time is running out for the FCC to act; a new presidential administration means that current Chairman Tom Wheeler will be replaced. President-elect Donald Trump has entrusted Jeff Eisenach and Mark Jamison with his FCC transition team, both of whom follow his stance against government regulation of business.

Perfect timing, one might say, for a company to launch a zero-rating scheme without serious challenge.