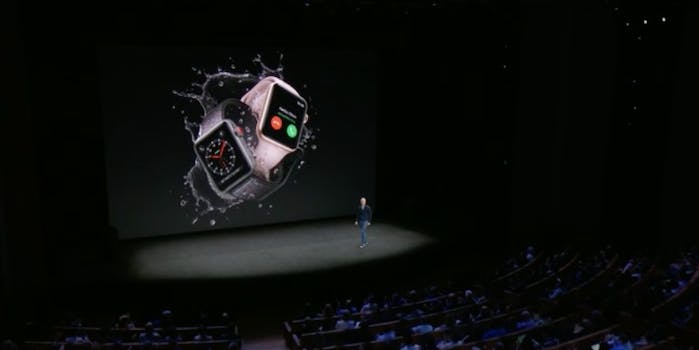 Most importantly: It's got cellular.

The Apple Watch has always felt handicapped. It’s fast and powerful but next to worthless unless you’ve also got your iPhone in your pocket. Not anymore: Today, Apple unveiled the Apple Watch Series 3, and it’s got built-in cellular service.

With LTE, you can now take your Apple Watch on a run and leave your phone at home. You can still track your workout, and you can still be reached in the case of an emergency. The Apple Watch Series 3 uses the same phone number as your iPhone, so you can get (or make) calls and texts as needed. You can also use apps that rely on an internet connection. Series 3 also includes GPS, so you can use Maps on your wrist to get directions.

Starting next month, you’ll also be able to use Apple Music on your Series 3. This will give users access to Apple Music’s library of 40 million songs. And when you summon Siri, she’ll be able to speak back to you, instead of just giving a response onscreen-only.

Despite adding a new cellular chip, the Series 3 is basically the same size as the Series 2. (Apple says it’s just .25mm thicker—the thickness of two sheets of paper.) Its dual-core processor inside is also 70 percent faster than that of the Series 2. Like the Series 2, it’s still swim-proof, and Apple claims it will still get all day battery life as well—18 hours using a mix of LTE, Bluetooth, and Wi-Fi.

Apple also updated the heart rate sensor inside the Apple Watch Series 3 (or at least how it works in WatchOS 4). Now, it can give you new measurements such as your resting heart rate. It calculates this daily via background readings and accelerometer data. During workouts, it can also calculate your recovery heart rate. You can use this to figure out if your personal fitness is improving—the lower and quicker your heart rate drops, the better. The Apple Watch will also notify you if your heart rate is elevated but no activity is detected. This can be a sign of a health issue.

Building on that, Apple is also introducing a new Apple Watch Study that will monitor your heart rhythm and alert you if it detects an unusual heart rhythm. This can be a sign of a common condition called atrial fibrillation, which can be a precursor to a stroke.