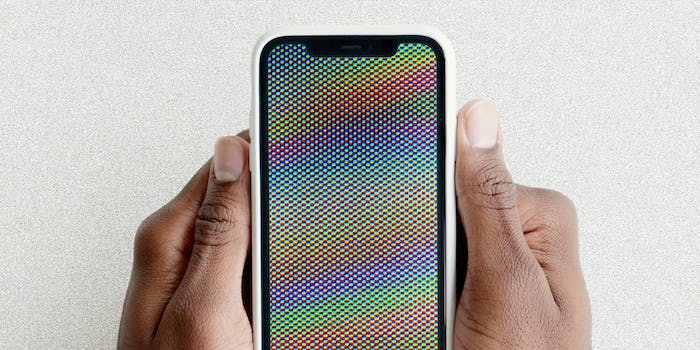 ‘The animals in that store [treat] the people who worked there like sh*t’: Apple employees strike on Christmas Eve after spitting incident

@AppleLaborers said that there was an inciting incident.

In an announcement via Twitter on Wednesday, Apple employees have said that they will be “staging a walkout/callout” in pursuit of improved working conditions. Specific requests include “hazard pay,” wage increases and adjustments, premium healthcare, “more accessible paid leave,” “full benefits” for part-time employees, and “protections from abusive customers,” alongside increased COVID-19 precautions in Apple stores.

On Thursday, the Daily Dot learned what incident sparked the strike.

The statement came from @AppleLaborers, which describes itself “Apple workers in retail, corporate, and AppleCare uniting to change Apple.”

Apple employees asked customers via the Twitter account to not cross the “picket line” by not buying in Apple stores and online.

In a statement to the Daily Dot via Twitter direct message, @AppleLaborers said that the inciting incident for the strike was a customer spitting on an Apple employee in Jacksonville, Florida. The customer was “not only not asked to leave—they were allowed back in the store repeatedly.”

“The employee who was assaulted was essentially told the customer did nothing wrong, but has since been convinced to file a police report,” @AppleLaborers told the Daily Dot. “Upon hearing about the store’s plan to walkout, we decided to spread it further for support, in asking the public not to purchase Apple products today.”

@AppleLaborers also cited “COVID surges” in Apple retail stores as a reason for the strike.

The walkout is being characterized as a “wildcat strike” because Apple it is not endorsed by any Apple trade unions. It also comes on the heels of strikes at Kellogg, John Deere, and continuing demonstrations among Amazon workers.

According to AppleTogether.org, the official website of the strike, Apple employees say that they have attempted to organize and make “requests to leadership” via Slack.

“We’re seeing an increase of rules restricting our ability to continue collaborating on workplace issues that are important to us,” the website states. “We’re making our own space off of our virtual campus to ensure our voices can still be heard.”

AppleTogether.org also aligns itself with #AppleToo, a movement that invites Apple workers to share their stories of “racism, sexism, inequity, discrimination, intimidation, suppression, coercion, abuse, unfair punishment, and unchecked privilege,” in order to organize for “systemic change” in Apple workspaces. (While #AppleToo has been called a union, @AppleLaborers don’t seem to be identifying the account as union.)

Twitter user Carwyn Candila praised Apple workers for organizing against the burdens that their employees have put upon them.

Others referenced an article from the Verge reporting that working conditions at Apple are “untenable.”

And other Twitter users reminded that Apple stores include the company’s App store, as well.

A discussion of the Twitter announcement from @AppleLaborers on Reddit revealed anecdotes related to the demands from Apple employees—especially protections from “abusive” customers and lack of paid leave.

“I worked at the genius bar at a store in the midwest for four years. There was sexism, harassment, and threats from customers,” r/thisisthewell shared on Reddit. “One of my coworkers was grabbed by the shoulders and forcibly kissed on the lips. Everyone on the genius team was on anti-depressants or in therapy.”

“They told anyone who tried to take classes that they would NOT work around classes, second jobs, or even give people Sunday off for religious days,” they said.

“Oh my god, the animals in that store treating the people who worked there like shit,” she said. “Add to that the company doesn’t treat them right.”

TikToker @bluecollarlefist encouraged his followers to not cross the picket line and “support your fellow workers.”

“The most powerful tool of the working class is to withhold our labor,” he said. “Solidarity forever.”