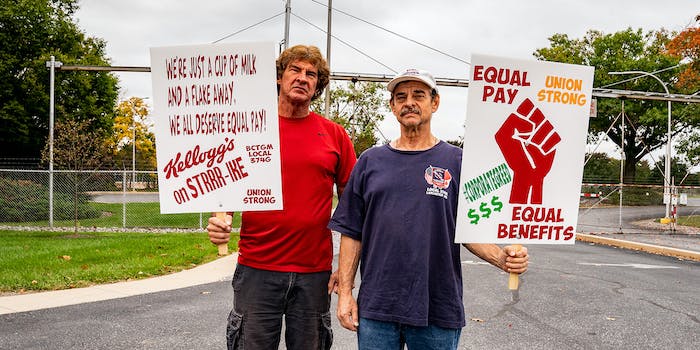 Users are being urged to flood Kellogg with fake resumes as it tries to replace striking union workers.

Reddit users are bombarding Kellogg with fake job applications amid attempts by the food manufacturer to replace its striking union workers.

In a post on the r/antiwork subreddit, users are being encouraged to submit fabricated applications amid the company’s attempts to bring on 1,400 new workers.

“The workers at Kellogg’s cereal plants have been striking for fair pay,” the post says. “Kellogg just announced they will hire 1400 permanent replacement scabs to break the strike. And they are accepting applications online!”

The strike has been taking place outside of production plants in four cities since Oct. 5. The hiring attempt by Kellogg comes after workers recently rejected a proposed contract from the company.

Descriptions on the job listings, which were posted online late last month, specifically note that prospective workers would be taking positions from employees on strike.

“The Unions representing Kellogg employees in these plants are on strike, and we are looking for employees to permanently replace them, joining hundreds of Kellogg salaried employees, hourly employees, and contractors to keep the lines running,” the listing states.

The Reddit post has since been upvoted more than 45,000 times, with users flooding the comments to announce their participation.

“I live near one of these. I’ve applied with full intentions of showing up and wasting their time,” one user said.

Users also shared video interviews with those on strike detailing the grueling conditions they face at Kellogg.

In a statement online, Kellogg reacted to the rejection of its latest contract proposal by arguing that it had offered a “fair agreement.”

“We have made every effort to reach a fair agreement, including making six offers to the union throughout negotiations, all which have included wage and benefits increases for every employee,” the company said. “It appears the union created unrealistic expectations for our employees.”

Kellogg went on to defend its attempts to replace workers to “ensure business continuity.”

“The prolonged work stoppage has left us no choice but to hire permanent replacement employees in positions vacated by striking workers . . . While certainly not the result we had hoped for, we must take the necessary steps to ensure business continuity,” the company added. “We have an obligation to our customers and consumers to continue to provide the cereals that they know and love.”

Speaking with reporters outside of a Kellogg plant in Memphis on Tuesday, local union vice president Kevin Bradshaw offered support to the strikers who had rejected the company’s proposal.

“The majority said they didn’t like it,” he said. “It’s the only issue that matters.”