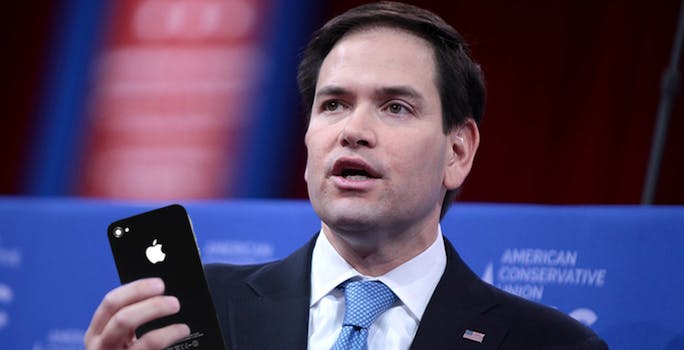 A magistrate judge on Tuesday ordered Apple to design a custom software package that would let the FBI send rapid-fire password attempts to the iPhone used by San Bernardino shooter Syed Rizwan Farook without triggering an auto-erase feature. Although the order, which Apple said it would fight, does not compel the company to compromise the device’s encryption per se, privacy advocates are tying it to the larger debate about whether tech companies should design their encryption to guarantee investigators access to it.

Rubio and Cruz, who are both vying to unseat New York businessman Donald Trump as their party’s frontrunner, offered opposing views of the order during a CNN town hall on Wednesday night.

“If you create a backdoor, there is the very distinct possibility that a criminal gang could figure out what the backdoor is.”

Rubio, the Florida senator who revived his campaign after a poor debate performance last Thursday and recently received the coveted endorsement of South Carolina Gov. Nikki Haley, praised the full-disk encryption that Apple made standard in its iOS software in 2014.

“What it does is it protects your privacy,” Rubio said of the encryption, which even Apple cannot break. “If you lose your iPad or you lose your phone, no one can hack into it and get your information. So that’s why it’s there.”

Farook’s iPhone does not have that feature, but Rubio’s answer suggested discomfort with both the California order and the separate demand—voiced by senior officials like FBI Director James Comey—that tech companies add “backdoors” to their products’ encryption. His two-part argument mirrored the repeated warnings of privacy advocates and security experts.

“If we passed a law that required Apple and these companies to create a backdoor,” Rubio said, “number one, criminals could figure that out and use it against you. And number two, there’s already encrypted software that exists, not only now, but in the future, created in other countries. We would not be able to stop that.”

“If you create a backdoor,” he said later, “there is the very distinct possibility that a criminal gang could figure out what the backdoor is.”

But Cruz, the firebrand Texas senator and former state solicitor general, saw it very differently, offering a more succinct response that appeared to brush aside the privacy concerns underpinning the specific order and the broader encryption debate.

“I believe they should” comply, Cruz said. “They have a binding search warrant. Any time you’re dealing with issue of security and civil liberties, you’ve got to balance them both, and I think we can walk and chew gum at the same time. We can protect ourselves from terrorism and also protect our civil rights.”

While the two senators appeared to differ sharply on the question of whether tech companies should accommodate government requests for access to secure products, Rubio actually endorsed the need to reach some kind of agreement between the tech industry and the government.

“There has to be a way to deal with this issue that continues to protect the privacy of Americans but creates some process by which law-enforcement and intelligence agencies could access encrypted information,” Rubio said. “I don’t have a magic solution for it today. It’s complicated.”

Rubio also described the debate as “a new issue that’s emerged just in the last couple of years,” but that is not correct. Commercial encryption has existed—and terrorists have used it—for decades.

In 1994, Congress passed a law requiring phone companies to design their systems to facilitate government wiretaps, and it later amended the law to cover Internet service providers. One way to mandate encryption backdoors would be to extend the law, known as the Communications Assistance for Law Enforcement Act (CALEA), to cover newer tech companies like Apple and Google by removing some of the exemptions that privacy groups won during the initial legislative debate.

This isn’t the first time that Rubio and Cruz have differed on a technology issue. They previously sparred over a surveillance-reform law that changed how the National Security Agency can access information about Americans’ phone calls. Rubio criticized Cruz for voting for the law, the USA Freedom Act, while Cruz defended his position by saying that the law expanded the universe of records available to the NSA.