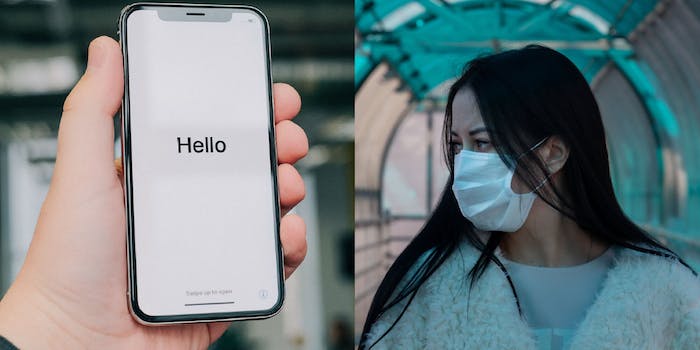 Problem unlocking your iPhone with a face mask on? Apple plans to fix that

A new iOS update will make it easier for face mask-wearers to unlock their iPhones.

Putting on a face mask when going out has become a normal routine for most to protect themselves and others from the coronavirus. However, donning the protective gear may make the simple act of unlocking your iPhone using Face ID a little tricky.

USA Today reports the Apple IOS 13.5 update will simplify “the unlock process … by automatically presenting the passcode field after swiping up from the bottom of the Lock screen.” The feature will also work on other apps that utilize Face ID authentication.

The update will be available for the following devices: “iPhone X, XS and 11, including their Plus and Pro versions,” according to USA Today.

It’s safe to say the new update is much needed. People have been complaining online about the recent—albeit small technical problem compared to all that is going on in the world—they’ve run into.

Earlier this month, Apple announced that, in conjunction with Google, it would be releasing a contact tracing software using Bluetooth. The software “will alert users if they’ve come into contact with anyone who has tested positive for COVID-19,” the Daily Dot previously reported. The beta version of IOS 13.5 will feature the first version of application programming interfaces to aid with contact tracing, according to Apple.

Apple hasn’t announced an official release date for the new IOS 13.5 update. However, it told USA Today, the update “will be available to the public soon.”