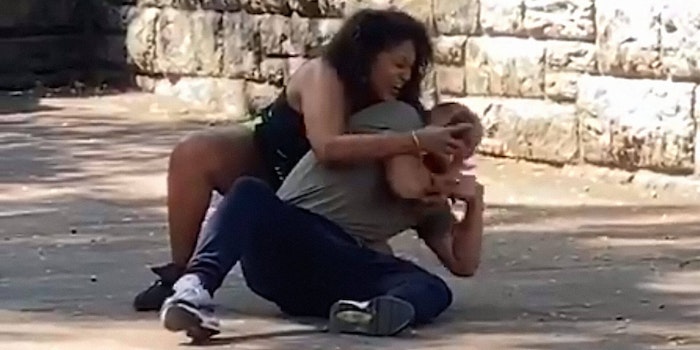 His moves are... graceful.

The iPhone’s Face ID feature caused a fair amount of uncertainty when it first came out, and people were concerned about privacy and security. Your partner trying to unlock your phone with your face ID may or may not have been among those concerns. But if it wasn’t then, it definitely is now.

A viral video circulating on Twitter shows a woman and a man—perhaps her boyfriend—sitting outside. Things take a turn when the woman starts shoving the man’s iPhone in his face in order to unlock it using Face ID. As she gets the phone close, he closes his eyes and covers his face. He dodges and swerves in a move sequence that almost looks graceful.

“Man I thought she was pepper spraying him but she trying to get his Face ID,” Twitter user @EliiDaRuler captioned the video, which got over 460,000 likes.

There’s a wide range of reactions to this video, from people wondering what the boyfriend has to hide on his phone to others deeming the woman’s actions as an invasion of privacy.

“If he acting like this you shouldn’t even want to see what’s in his phone, just throw the whole man away honestly,” @xokoriee wrote.

Or he just wants his privacy and she can't respect that to the point of literally assaulting him.

She is the one violating trust in this situation. This is borderline domestic violence my dude.

“Or he just wants his privacy and she can’t respect that to the point of literally assaulting him. She is the one violating trust in this situation. This is borderline domestic violence my dude,” @BTHBcRMY added.

Having received a lot of retweets rather quickly, this was bound to stir up some drama. Some people are speculating that the entire video was staged. Others are impressed by the man’s ability to dodge the Face ID, using GIFs to show their admiration.

And of course, the video has been meme’d.