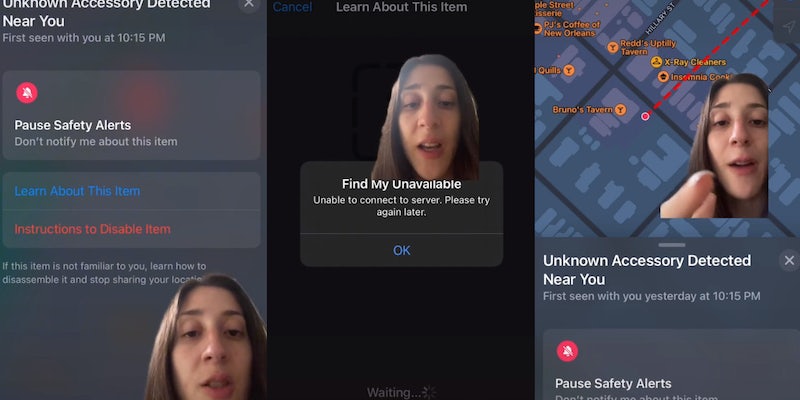 TikToker Erika Torres received a notification on her iPhone saying that an “unknown accessory” was “detected” near her phone on Dec. 10. When she tried to get more information about the accessory and even tried to disable it, her phone was “unable to connect to server.”

“I instantly recognized this from all the viral TikToks I’ve seen about women finding AirTags and other tracking devices planted on their belongings or their cars,” Torres said in a TikTok she posted last month. “I checked all my clothes, my belongings, my purse. I haven’t been able to find it.”

She showed on a map that the device had tracked her from her parked car, to a bar she went to, and then onto her drive home. After calling the police, she was told to alert them if “somebody hurts” her.

Torrres’ TikTok follows multiple horror stories of women being tracked via AirTags. TikToker @angel.edge95 received a notification that an “unknown accessory” had been “moving with” her for “a while.” Her iPhone also alerted her that the owner of the accessory had access to its location. She shared that a friend’s sister had been tracked via an AirTag placed under her license plate, and commenters on her video shared that they had had similar experiences.

The New York Times reported this week that unlike the police department that Torres dealt with, law enforcement agencies in the U.S. and Canada are pursuing investigations into AirTags placed in and outside of cars without the owner’s knowledge.

Torres kept her followers updated on her situation with follow-up TikToks and videos on her YouTube channel, the latter of which was featured in the Times‘ reporting.

In an interview via Instagram Direct Message with the Daily Dot, Torres said that after speaking with Apple, the “general consensus” was that the notification that she received was a “glitch,” which she admits she remains confused about.

“Nonetheless I know there are many individuals who DID find AirTags planted on them so I wish there was a way to learn more,” she told the Daily Dot. “Whether or not the notification is a malfunction or if it is something actually following you.”

A spokesperson for Apple told the Times that “if users ever feel their safety is at risk, they are encouraged to contact local law enforcement who can work with Apple to provide any available information about the unknown AirTag.” But Torres sees it differently.

“I was very frustrated with the police and with Apple,” she told the Daily Dot. “I understand now that police aren’t trained to deal with this kind of thing.”

And despite the disparate experiences people have had with possible AirTag tracking, viral TikToks, Torres’ videos, and the Times‘ reporting all focus on one thing: The powerlessness that iPhone users feel when they receive a notification that an unknown device has been tracking their location.

“My heart goes out to all my fellow ladies (and men) dealing with this too,” Torres told the Daily Dot. “I hope we can find an answer.”