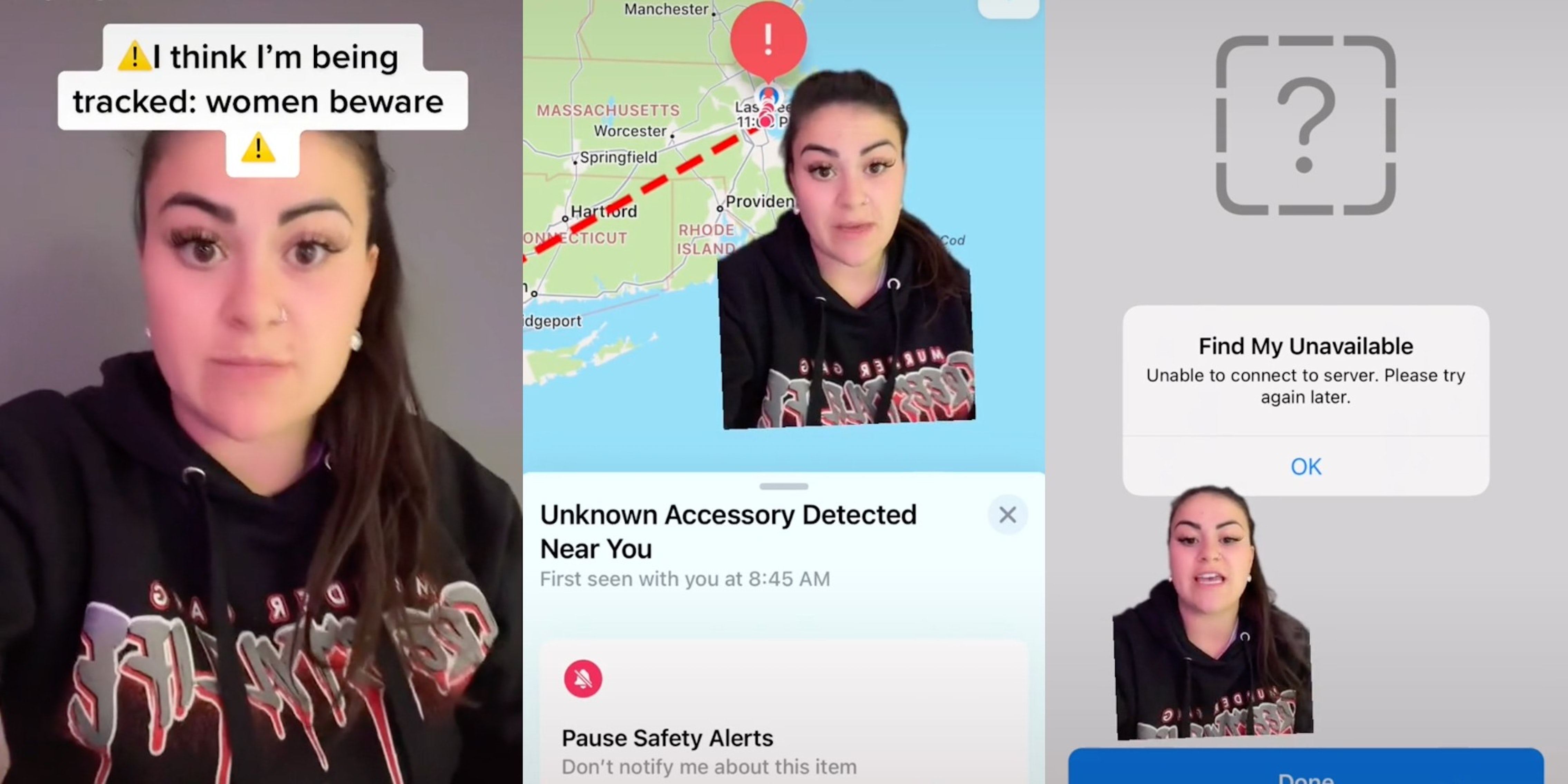 ‘Should I go to Apple or should I go to the police?’: TikToker thinks she’s being tracked after weird message pops up on her iPhone

The viral clip has more than 17 million views.

A woman on TikTok thinks she is being tracked and might be in danger after she saw weird messages popping up on her iPhone screen.

The TikToker, known as “biker baddie” or user @angel.edge95 on the platform, shared the explanation for her theory in a viral video. The TikTok received nearly 17 million views and almost 40,000 comments as of Wednesday.

She said she flew from her home in Texas to Maine to retrieve some of her belongings, and shortly after she landed at the airport, she got a strange notification. Apparently, her phone detected an “unknown accessory” near her. The notification said it first detected the accessory at 8:45am that day, when she was at Walmart in Texas.

The TikTok user said there was an option to “remove” the device, but when she tried to do so, she received another popup. It said “Find My Unavailable” and added that it was unable to connect to the server and try again later.

Basically, she wasn’t able to remove the unknown device, she said. An additional note at the bottom of her phone screen told her that if she felt unsafe to contact local law enforcement.

“Basically I’m gonna need the serial number of the device tracking me for them to shut it down anyway,” the TikToker said.

Apple AirTags, which were released in April, are mini devices designed to track easily lost items, like keys or wallets. Once placed on an item, the AirTags can be tracked through the Find My app on Apple devices. As they’re less than two inches in diameter, the devices could likely be easily hidden in a strangers’ belongings without their knowledge.

“It just shows a red dot every time they physically checked my location, every time it was reloaded,” she claimed.

The TikToker said she searched her belongings but couldn’t find the mystery device or anything that looked like a tracker.

She added that she had heard of people having issues like this with their AirPods, but pointed out that she didn’t have her AirPods near her at the time of the notifications.

She thought she had fixed the problem after turning off her Bluetooth and location services, but she got another notification that the owner of the device had seemingly checked her location.

The TikToker said she told a friend the story, and he told her the same thing had happened to his sister a few weeks ago. His sister ended up finding an Apple Air Tag under the license plate of her car.

“So I don’t know if this is the new sex trafficking method, but please look out for your loved ones. Be extra careful, and search your belongings if you get these notifications,” the TikToker warned.

In a later comment on her video, the TikToker wrote that she was working with law enforcement, but they had asked her not to talk about it on social media yet.

Several viewers recounted similar experiences in comments on the TikTok, while others called out Apple for the air tags product.

“Apple releasing the air tags was the biggest mistake they ever made,” one viewer wrote.

Another viewer commented, “Apple needs to recall those things because clearly people aren’t using them the right way.”

User @angel.edge95 did not respond to the Daily Dot’s request for comment.