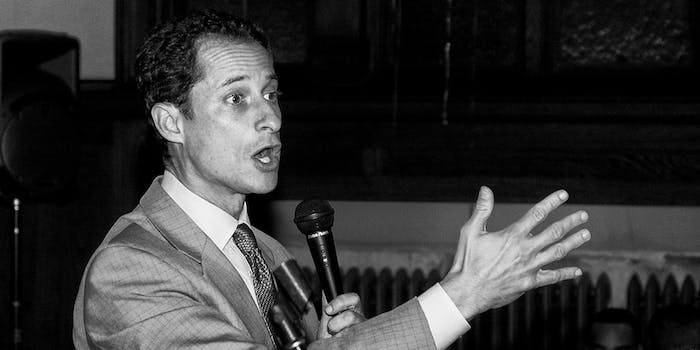 It would have been a softball question for anyone other than the sext-happy New York City mayoral candidate.

In a 21st-century political debate, the question “Facebook or Twitter?” is a bit of a softball. Just not for sext-happy New York City mayoral candidate Anthony Weiner.

Weiner, whose uncensored nude selfies were published on the Dirty today (the very definition of NSFW, really), participated in a mayoral debate with rival Democratic candidates who have cited the newest revelations about his lascivious online persona as reason to drop out of the race.

It would have been excruciating enough for the moderator to ask Weiner his preferred social media platform directly, but instead everyone on stage had to answer the question, starting with Sal Albanese and ending, at the opposite end of the table, with Weiner. He dives for a nervous sip of water as soon as he hears the question and squirms a bit as his turn comes around.

By the time a few candidates have unconvincingly answered “both” and Erick Salgado announces he is “trying to learn how to use Twitter,” the audience is laughing pretty hard, and Weiner eventually joins in as applause breaks out, along with some daytime talk-show hollering.

“All I can say is, Salgado, don’t ask me,” Weiner finally says. “But our campaign’s on Twitter.”

A smooth save, but it may not save the candidate. The latest numbers from a Wall Street Journal poll indicate Weiner slipping from first place in the Democratic field, with 16 percent support compared to Christine Quinn’s 25 percent, as well as an unfavorability rating of 55 percent.

Maybe he should give it up and run as “Carlos Danger.” It has the ring of electability to it.