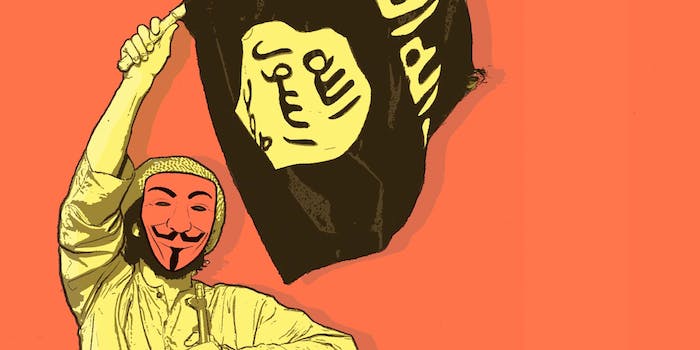 This article contains images that readers may find offensive or NSFW.

Get ready for laughs: Anonymous activists have called for the world to come together and make fun of the Islamic State online on Friday.

It’s being called #trollingday. In a note disseminated by a number of Anonymous-designated Twitter accounts, activists encourage readers to do everything in their power to annoy members of the terrorist group. “Do not think you have to be apart [sic] of Anonymous,” the group said.

There’s a wide buffet of “trolls” one can engage in. One is to call them “Daesh” and “Daeshbags,” a mocking nickname for the group that functions both as an acronym for the group’s name in Arabic and can refer to them as bigots. Another is to “spread mocking photos of ISIS,” though it’s not exactly clear where to go if one doesn’t already have a good ISIS joke or meme in their head (or saved on their hard drive). Or if you’re the auteur type, you can “make mocking videos of ISIS” and post them on YouTube.

The effect of such efforts is almost impossible to quantify. For months leading into the beginning of early 2015, when Twitter was still the terror group’s go-to social media site for English-language operations,  Anonymous-affiliated and other groups spent countless hours identifying and reporting accounts they suspected belonged to ISIS members. Experts said at the time that those efforts probably did play a moderate role in limiting the terror group’s recruitment.

But as more and more groups have gotten in on the practice, it may be doing more harm than good. Researchers who vetted those lists found them “wildly inaccurate,” Twitter previously told the Daily Dot, with the names of innocent journalists and academics included in the rosters.

Due to the launch of these campaigns, Twitter is no longer ISIS’s favorite site.

“It does frustrate their ability to communicate with each other, to recruit and everything, but they’re all moving off of Twitter,” Ryan Mauro, a national security analyst at the Clarion Project, a nonprofit that tracks Muslim extremist groups, told the Daily Dot. “They expect this.”

Instead, Mauro said, they’ve moved in droves to other platforms like Telegram, Ask.FM, the “Russian Facebook” VK, and even Tumblr.

Still, there are still plenty of ISIS supporters who use Twitter, and it certainly doesn’t do any harm to openly mock them. Some users have already gotten into the spirit.

Many of the early entries focus on one of three highly offensive themes—some of which are likely offensive to far more than just ISIS militants: that ISIS members are secretly gay, that they like to have sex with goats, or something to do with rubber ducks.

Whether this is an appropriate response is subjective, of course, but material like this can work, said Mauro. “Mockery and things like that really irritates ISIS,” he said, “so I kind of like it.”