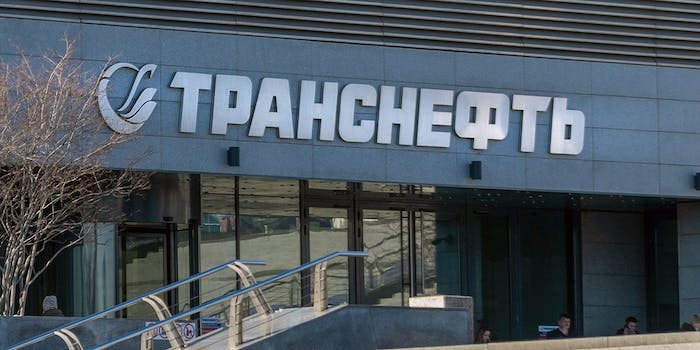 Hackers leaked over 79 gigabytes of emails from the Russian state-controlled pipeline company Transneft amid the country’s ongoing bombardment of Ukraine.

The hackers, who identified as belonging to the leaderless hacktivism movement Anonymous, provided the data trove to the journalist non-profit group DDoSecrets.

The documents, reviewed by the Daily Dot, reveal how companies are struggling against the wave of hacktivism that’s part of the fight against Russia.

The emails appear to have originated from Transneft’s R&D department known specifically as the OMEGA Company.

In a statement on the release, DDoSecrets, which has been compared to a modern-day WikiLeaks, noted that the emails include discussions on the U.S. sanctions placed against the company on February 25 due to Russia’s invasion of Ukraine.

DDoSecrets also warned that the emails, which include attachments, could contain malware given the increase in targeted hacks against Russian companies in recent weeks.

The hackers responsible also sarcastically dedicated their breach to former Secretary of State Hillary Clinton, who mentioned an alleged hack carried out against Russia by Anonymous during a recent interview on MSNBC. Clinton would go on to encourage further “cyberattacks” and non-governmental action against the Russian state.

“There were reports overnight that Anonymous, a group of hackers, took down Russian TV,” Clinton said during a February 25 appearance on MSNBC’s Morning Joe. “I think that people who love freedom, people who understand that our way of life depends upon supporting those who believe in freedom as well, could be engaged in cyber support for those in the streets and Russia.”

Aside from sanctions, examination of the emails by the Daily Dot showed that the pipeline company was likewise concerned over hackers as well.

A document in the leak detailed security protocols the company was asked to take in response to the wave of hacktivism targeting Russia. Metadata for the document suggests the file was created on March 14.

“Dear Leaders! In order to increase the level of security with increased risks of external influence on the information resources being operated, I ask you to take measures to block threats and comply with information security requirements,” a translation of the document reads.

The measures include changing passwords at random, introducing a moratorium on foreign software updates, enabling multi-factor authentication, and running a full anti-virus scan.

Emails also show passwords to Zoom meetings set up by the company. Other emails date to 2018, but could go back further given the size of the leak.

The Daily Dot reached out to Transneft over email to inquire about the hack but did not receive a reply by press time.

The incident is just the latest in a growing number of hacktivist campaigns aimed at Russia over its continued aggression towards Ukraine. But not all hackers are breaching systems and pilfering data. At least one hacking group known as squad303 created an online tool to allow anyone to send texts, emails, or WhatsApp messages to Russians in order to inform them about the war.