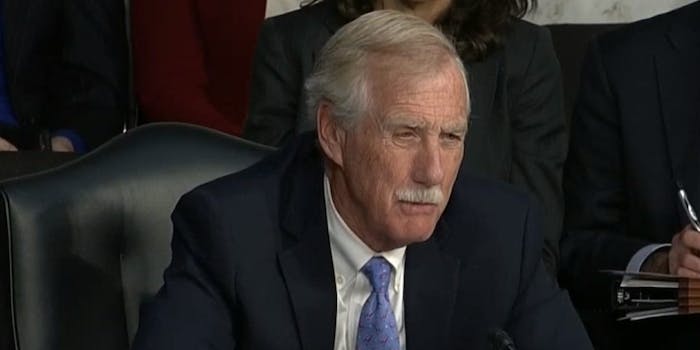 King suggested the U.S. needs to create a 'cyberwar deterrent.'

Sen. Angus King (I-Maine) told Twitter, Google and Facebook on Wednesday afternoon that he believes Russia got a “free pass” for the interference it caused on American social media giants’ platform ahead of the 2016 election and other campaigns it has waged.

King, who called Russia’s influence online a “sophisticated worldwide strategy,” used information compiled by Alliance for Securing Democracy to show that Russia continues to try and interfere in American discourse by propagating hashtags related to President Donald Trump‘s attacks on NFL players kneeling during the national anthem, Trump’s catchphrase “MAGA,” and the ongoing conflict in Syria.

King, who expressed disappointment that the three tech companies sent attorneys rather than their CEOs to testify before the Senate Intelligence committee, said the goal of Russia’s influence campaign online was to sow discord and that it won’t stop unless something is done.

“One witness this committee had said that their strategy is to take a crack in our society and turn it into a chasm,” King said, later adding: “We as a society have to realize when we are being conned.”

“If they’re going to undertake a campaign like this, there will be a price to be paid, there will be results,” he said of such a policy. “Right now, that doesn’t exist, and all of what the Russians did last year has basically been a free pass.”