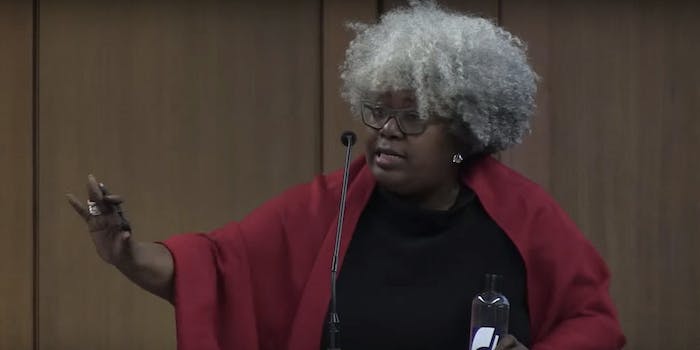 Butler's remark was likely aimed at the NASCAR culture and not Carson himself.

A University of Pennsylvania professor is in hot water after tweeting the word ‘coon’ in reference to Republican presidential candidate Ben Carson.

Dr. Anthea Butler, who teaches religious studies at the Ivy League university, was responding to a tweet from a reporter about a Sports Illustrated article in which Carson said he thinks NASCAR fans should be allowed to fly the Confederate flag on private property.

“If only there was a ‘coon of the year’ award,” Butler remarked. She later deleted the tweet and set her account to private. 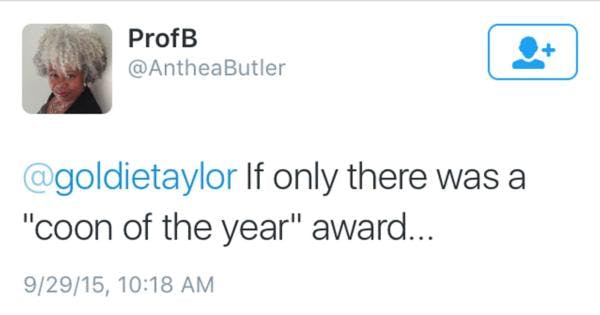 Carson acknowledged to reporters that the Confederate flag remains a “symbol of hate for some people,” and he compared it to a Nazi swastika. Yet, “[i]f a majority of people in that area want it to fly, I certainly wouldn’t take it down,” he said.

Butler previously drew the ire of conservatives in July 2013 for suggesting that George Zimmerman’s acquittal in the death of teenager Trayvon Martin helped support the notion that the “American god” is a “white racist god.”

“God ain’t good all of the time. In fact, sometimes, God is not for us. As a black woman in a nation that has taken too many pains to remind me that I am not a white man, and am not capable of taking care of my reproductive rights, or my voting rights, I know that this American god ain’t my god. As a matter of fact, I think he’s a white racist god with a problem. More importantly, he is carrying a gun and stalking young black men.”

Butler later said that when she was using “god” with a lowercase “g” she was not referring to an actual deity, like the “Christian God.” She added that conservative Christians got “touchy” about her post because she “hit on some things that are kind of true.”