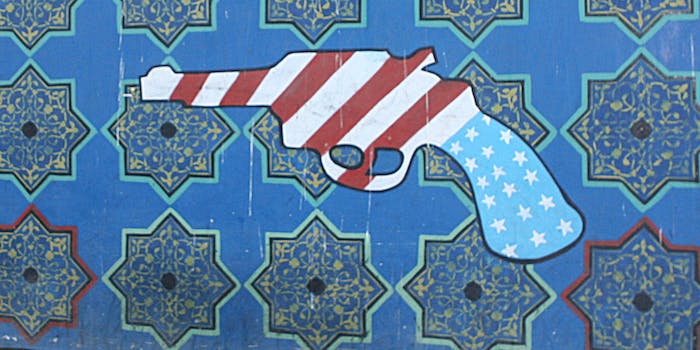 Andy Hallinan isn't a big fan of Islam, but his new best friend is a Muslim.

Hallinan is the controversial owner of a Florida gun store that he declared a “Muslim-free zone” in the wake of a deadly attack on a military facility in Chattanooga, Tennessee, by a 24-year-old Muslim man. Shibly, a director at the Council on American-Islamic Relations (CAIR), plans to join Hallinan at the store on Saturday for what the two are billing as a peaceful conversation about Islamic scripture and the Second Amendment.

Despite all of Hallinan’s anti-Muslim rhetoric, he now counts Shibly as a friend. “I think the world of him,” he says.

“If I was a Muslim, and I was seeing all the stuff going on in my faith, I would call myself something different.”

Hallinan, who has a background in marketing, was propelled into the national press by a Facebook video that has been viewed now over 142,000 times. It begins with an impassioned defense of the Confederate flag and an indictment of the Black Lives Matter movement, followed by footage of the Ferguson and Baltimore riots and criticism of America’s leaders, President Barack Obama in particular.

While the video may represent deeply held political and religious beliefs, at its core, it is essentially an advertisement for Florida Gun Supply, one that has been remarkably effective. Throughout the week, Hallinan’s commercial has been aired on national television numerous times—free of charge.

Despite his use of Confederate imagery, Hallinan does not come off as the unintelligible redneck his detractors might prefer at the center of a national spectacle. He has vowed never to wittingly sell a gun to a racist; Christianity, he insists, is not synonymous with “anti-homosexuality”; and he maintains he’s open-minded about the possibility he’s wrong about Muslims.

Sometimes, Hallinan says, he looks to Obama for ways to motivate people, “not because I believe in what he has to say, but I believe the way that he says it.”

“But you better believe,” he adds, “I think he’s the worst president in American history, and I never voted for him.”

“As far as Republican vs. Democrat,” Hallinan says, “I’m steering farther and farther away from that because, unfortunately, the Republicans aren’t doing very well either.” He adds: “I do know, beyond a shadow of a doubt, that the only person who has my vote right now is Donald Trump.”

In an apparent contradiction to the store’s “Muslim-free” policy, Hallinan invited Shibly to a gun-safety course this weekend—an offer he retracted a day later. Shibly is, however, still coming and plans to teach Hallinan about the tenets of Islam.

“Frankly, we share enemies. Except I got it coming from both sides.”

“I’m going to meet with him and we’re going to study the Quran together and see if I’m completely off base with what I believe,” Hallinan says. “But, as far as actually putting a gun in his hands, I’m not going to do that. It’s not him that I necessarily don’t trust, it’s his organization.”

The decision, he admits, follows a barrage of emails calling CAIR a terrorist organization (a long-time criticism but one that’s unfounded). They were convincing, he says. Nevertheless, he describes Shibly as a “very fine individual.”

“I think he’s facing a backlash,” Shibly tells the Daily Dot by phone, speaking about Hallinan. “I’m sure there are people who want to hijack this from his end.” Shibly says his group is happy with how things are turning out so far. He went out earlier this week and bought a set of books as a gift to Hallinan.

“Frankly, we share enemies,” Shibly says. “Except I got it coming from both sides. I have groups like ISIS sending me threats, and people who [support Hallinan] are sending me death threats as well.” Americans who persecute their Muslim neighbors, according to Shibly, are playing into the hands of the terrorists, allowing them to fracture inter-faith cooperation.

“We can’t let our enemies divide us,” he says.

There is little nuance to Hallinan’s perspective on Islam. No one who has objectively studied the Quran believes it is a peaceful religion, he says. Inversely, “nobody that reads the Bible today ever comes away with any inkling that they are commanded to do harm to others in the name of our religion.”

“It’s really a double-standard,” says Shibly. “He thinks Islam is evil because there’s some bad things Muslims did.”

Hallinan implies that Christians who commit atrocities aren’t actually Christians. But the opposite rule applies to Muslims: Those who find peace and tolerance through Islam, like Shibly, aren’t its true practitioners.

“If I was a Muslim—I know that’s pretty ignorant to say, admittedly—but if I was a Muslim, and I was seeing all the stuff going on in my faith, I would call myself something different,” says Hallinan. “‘Reformed Muslim,’ or whatever, to completely differentiate myself between what we’re seeing these jihadis do and what I believe my faith is.”

Hallinan sounds like a man being pulled hard in two directions. The world’s 1.6 billion Muslims are just like everyone else, he insists. They live their lives the best they can. They try to do right by their families. “They’re not out to get us,” he says. It’s just that at the heart of their religion lies something vicious and destructive. “It’s okay to say evil is evil,” Hallinan says, repeating what has become his tagline.

Despite the audacity of Hallinan’s video and the impassioned support from others who fear Islam, he and Shibly have managed to find a land that seemed lost in the world of American politics: common ground.

“We are both very passionate, very knowledgable, and very aggressive in our perspectives,” says Hallinan, “and that’s what makes us like each other—is that we respect the other for our beliefs, even though we complete disagree with one another.”

Update 8:22pm CT, July 23: After this interview was published, the Daily Dot learned that Andy Hallinan decided to cancel his Saturday meeting with Hassan Shibly entirely.