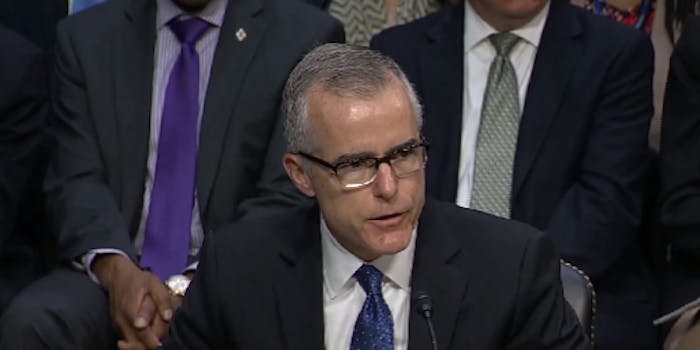 After months of criticism and attacks from President Donald Trump, former FBI Deputy Director Andrew McCabe was fired by the Justice Department on Friday just two days prior to retirement, costing him an estimated $60,000 per year lifetime pension. Now, several Democratic politicians are rallying behind McCabe, offering him a couple days of official federal work in the hopes of restoring that pension.

McCabe, 49, was fired following a determination by the inspector general that he failed to be “forthcoming” regarding the bureau’s investigation of former Democratic presidential nominee Hillary Clinton in 2016.

Andrew McCabe FIRED, a great day for the hard working men and women of the FBI – A great day for Democracy. Sanctimonious James Comey was his boss and made McCabe look like a choirboy. He knew all about the lies and corruption going on at the highest levels of the FBI!

This official explanation has been questioned by some Democrats, who clearly believe the president―who has been publicly attacking McCabe for months, while asserting he’s the victim of a conspiratorial witch hunt by independent counsel Robert Mueller and FBI higher-ups―is acting out of craven self-interest—or even revenge. Last December, Trump tweeted “FBI Deputy Director Andrew McCabe is racing the clock to retire with full benefits. 90 days to go?!!!”

As a result, multiple Democrats have now hit up McCabe on Twitter, in the hopes of employing him long enough to trigger his pension anyways. For instance, Illinois Rep. Luis Gutierrez tweeted on Saturday that McCabe should call him on Monday if he’s looking for work.

To Andrew McCabe: If you need a federal job, call me on Monday. I am serious. We have to stand up to bullies like @realDonaldTrump & @jeffsessions @USAGSessions #Resist #twill #AndrewMcCabeFired #standuptobullies #chicago @Comey

Wisconsin Rep. Mark Pocan did the same, although he actually implied what he wanted McCabe to do for him.

Andrew call me. I could use a good two-day report on the biggest crime families in Washington, D.C. https://t.co/DYVP00Em0x

Maryland Rep. Jamie Raskin also joined the chorus, blasting Trump for doing a “vicious and terrible thing” and insisting he had a “perfect” job for the former FBI official.

Andrew McCabe: I have the need to hire a Special Senior Staff Attorney to help me with my work on the House Judiciary Committee dealing with threats to the Constitution and the rule of law in America. You're perfect for the job. DM me.

It remains to be seen whether McCabe will take any of these Democratic representatives up on their offers. It’s also possible he could file a lawsuit arguing he was wrongly terminated, although he’s so far made no public indication what his next move will be. He had made it clear, however, that he believes he was the target of a politically motivated smear campaign by Trump, and he has said he wrote extemporaneous memos about his interactions with the president, leading to a Trump Twitter rant on Sunday morning.

According to recent reports, McCabe is no longer in possession of those memos, having reportedly turned them over to Mueller for his investigation.