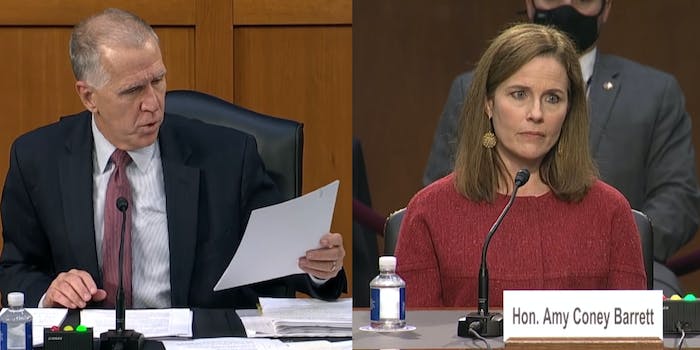 He just finished telling the nominee to treat social media like 'roadkill.'

The confirmation hearing for Supreme Court Justice nominee Amy Coney Barrett has had its fair share of viral moments—but a Republican senator reading mean tweets about her directly to her face is probably one of the odder instances so far.

Sen. Thom Tillis (R-N.C.) read the tweets to Barrett as part of his line of questioning on Tuesday.

What made the dictation of the mean tweets even more bizarre was that Tillis had just finished telling Barrett and her family to ignore social media and treat it like “roadkill.”

“I would encourage all your family members and … your children, who are your students too, who are mercifully taking a break, to treat social media like roadkill,” Tillis said. “Just don’t look at, because if you do, you’re going to regret it.”

Seemingly ignoring his own advice, Tillis then immediately proceeded to read mean social media posts to the judge.

“I’d also ask unanimous consent to put forth some articles or tweets from prominent people that I think kind of give you an idea of the guerilla tactics that are being used right now,” Tillis said, adding: “Behind the curtains we’re seeing people say all kinds of things about you. One called you a ‘white colonizer’ for actually adopting two Hatian children. We have another one calling you a ‘Handmaid in a clown car,’ and I’m not going to —it will be submitted for the record—but the profanity used in there. Another one that says ‘yeah you’re a good mom, but that doesn’t qualify you as a judge.’ … I think that these people need to recognize doing the bidding of this committee by attacking you outside of the committee is as bad as them being in this chamber.”

As journalist Parker Molloy pointed out, some of the tweets referenced by Tillis were highlighted in a Breitbart article.

The flip-flop from telling Barrett to ignore social media before immediately rattling off several mean tweets wasn’t lost on people.