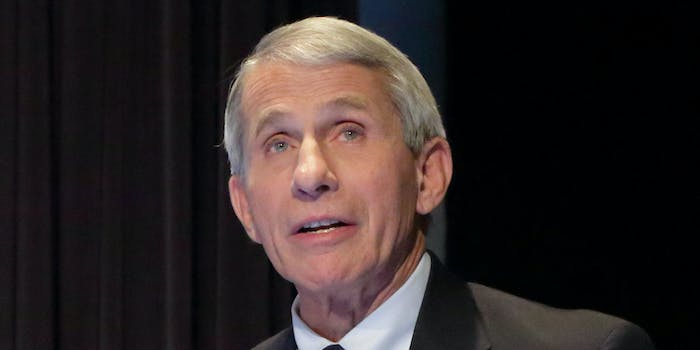 The event will be a who's who of misinformation peddlers.

On April 11, people pretending to be prosecutors will begin presenting a pretend case against Dr. Anthony Fauci at “America’s Grand Jury,” a 5-day-long exercise in futility that promises to be equally pointless and absurd.

America’s Grand Jury portrays itself as “the world’s most important grand jury” that will decide in a “fair and balanced way” whether Fauci should be indicted in a case that “involves the deaths of millions.” They believe that Fauci is responsible for the COVID-19 pandemic because the National Institute of Health provided some funding for bat coronavirus research to the Wuhan Institute of Virology, which conspiracy theorists have long been convinced leaked the virus. This theory, while possible, has never been definitively proven, nor has it been established that Fauci participated in a coverup as America’s Grand Jury insists. A fine print disclosure on America’s Grand Jury’s website notes that it’s a mock trial with “no legal authority,” but reassures people that it will “closely simulate” real grand jury proceedings—excepting of course that it’s open to the public and you have to pay to be on the jury.

While it professes to be fair and balanced, America’s Grand Jury’s witness list implies it’s anything but. Witnesses against Fauci—who, to be clear, is not being tried for any crime—are a bevy of right-wing anti-vaxxers who spent the COVID-19 pandemic keeping fact-checkers busy debunking the disinformation and conspiracy theories that were spread in spaces ranging from The Joe Rogan Experience to the Trump White House.

The sham trial appears to be organized by the Unity Project, an anti-vax activist group that supported the trucker convoy protests. Multiple witnesses and prosecutors are on the leadership team or otherwise affiliated with the Unity Project. America’s Grand Jury’s press contact has a Unity Project email address. Unity Project has promoted the trial on social media.

While the Unity Project has thus far remained focused on COVID and vaccines, it may be looking to broaden its horizons. America’s Grand Jury teases the upcoming fake trials of favorite right-wing scapegoats Hillary Clinton and Hunter Biden.

America’s Grand Jury isn’t merely a performance for passive viewers—it’s a participatory event for anyone who wants to see that fake justice is done.

For prices ranging from $25 to $10,000, people who loathe Fauci enough to give up five evenings pretend convicting him can join the jury that will undoubtedly decide “to bring Dr. Fauci and his bandits to justice,” whatever that means in this context. Those who aren’t content to merely cast a vote and hobnob in a chat room can pay $100 to receive a T-shirt and be on a Zoom call with the prosecutors. Up that to $250, and that T-shirt becomes a hat—plus the title of a “super juror plus,” which definitely means something. Those who pay $2,500 or more will get to hang out in the green room/potential super spreader event.

Some subscribers to its Telegram chat are miffed by the cost to participate. Others are excited to participate. “We have the right to hold him accountable for mass murdering us and making us sick,” wrote one.

Anyone who’s short on cash but nevertheless inclined to spend 15 hours watching fake court proceedings with a predetermined outcome can register to simply watch the event for free.

In its sizzle reel for the trial, America’s Grand Jury hints that Fauci isn’t the only person who might be brought to fake justice in its fake trial. Fauci’s potential co-conspirators comprise a shortlist of far-right conspiracy theorists’ favorite villains: Bill Gates, Mark Zuckerberg, “big pharma,” and “media elites.” It also references collusion and the federal law targeting organized crime, specifically the Racketeer Influenced and Corrupt Organizations (RICO) Act.

America’s Grand Jury’s prosecutorial team is led by a former Indiana State Attorney General equally known for Elvis impersonations and drunkenly groping women. Curtis Hill will be joined by co-counsel Parisa Fishback, a relatively unknown bankruptcy attorney/real estate broker from California who wants you to know that she’s a longtime registered Democrat (“since it seems to matter”).

Together they will endeavor to channel the vitriol for the longtime director of the National Institute of Allergy and Infectious Diseases into a recommendation to “prosecute”—or at least collect some cold, hard cash from the “jury.”