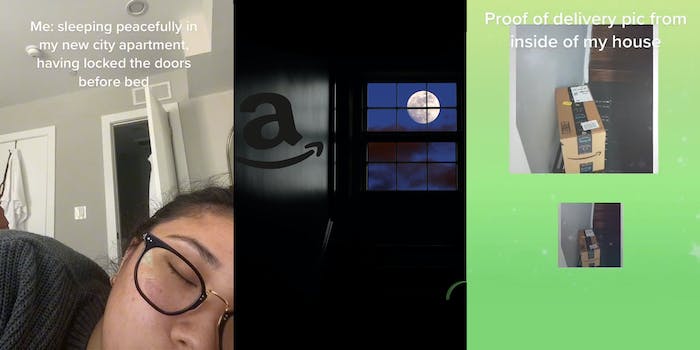 'Plz let me know how he entered.'

A TikToker claims an Amazon worker went inside her house to deliver a package. She says she was home at the time and asleep.

“Me: sleeping peacefully in my new city apartment, having locked the doors before bed,” TikToker Joy (@joy274839) wrote via text overlay on the video, which has been viewed 1.6 million times since it was posted on April 12.

The video then cuts to a photo of an Amazon package on the ground by a staircase.

“Proof of delivery pic from inside my house,” text on that portion of the video reads.

Joy thanked Amazon for the order but urged the company to “plz let me know how he entered” in the caption of the video.

Like Joy, many viewers responded to the incident with humor. “My delivery instructions clearly state that I was supposed to receive a little kiss on the forehead,” the top comment on the clip reads.

“I would’ve given 5 stars if he delivered it to [your] room,” another top comment reads.

Some viewers shared their similar experiences they’ve allegedly had with Amazon.

“Amazon once did this to me too at my old townhome … could hear him walking around downstairs, and he ran when he realized i was home,” one said.

“This happened to me to! The Amazon man came into my house and freaked out when he realized I was home,” another wrote.

Some were shocked that Joy’s experience is not a unique one. “how do so many people have stories of delivery drivers just coming into their house??? what???? why????” TikToker @hotmilfhotel questioned.

The Daily Dot reached out to the Joy via TikTok comment and Amazon via its media contact.