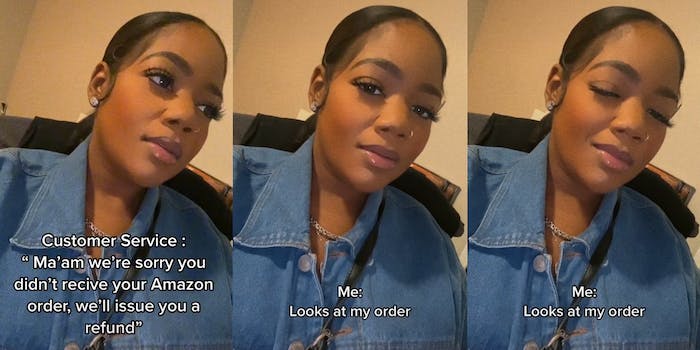 ‘Be careful they banned my entire address for doing this’: TikToker admits to taking advantage of Amazon’s refund policy, sparking debate

In a viral TikTok video, a customer admits that she told Amazon she didn’t receive her order so that she could take advantage of its refund policy, sparking debate among users in the comments.

“Customer Service: Ma’m we’re sorry you didn’t receive your Amazon order, we’ll issue you a refund,” user @_theecourtsoelegant wrote via text overlay on the video, recapping the apparent conversation she had with an Amazon worker.

She then pretends to look at the package she claimed she never received.

“Jeff aint gon miss this lil $39.99 order, according to forbes he good,” the TikToker captioned the video.

The TikTok received over 110,000 views and caused many users to debate the policy in the comments.

Many warned the TikToker of asking for a refund too many times.

“Be careful they banned my entire address for doing this I guess that iPad I didn’t receive was my last straw,” one user said.

“Eventually you’ll get flagged by Amazon and banned from ordering lol I used to work there,” another said.

“Girl they be quick to close people account lol that’s why I stop,” a third said.

Others expressed concern that customers taking advantage of the refund policy could prevent them from getting a refund when they need one.

“It’s messed up cuz they’re not going to believe me if my order doesn’t show up lmao,” one user said.

“lol and yet they’ve never refunded me and my shit really has been stolen. I’m jealous,” another said.

One user agreed with the TikToker that Jeff Bezos, with a net worth of over $170 billion, would not miss their cash.

However, some stressed that taking advantage of Amazon’s refund policy could have negative effects on small business owners and Amazon drivers.

“Jeff won’t miss it. Many small business owners put their products on Amazon, it does hurt them,” one user said.

“As an Amazon flex delivery driver this affects us … I almost got kicked out cause [people] kept saying they didn’t receive their package,” another claimed.

The Daily Dot reached out to user @_theecourtsoelegant via a TikTok comment and Amazon via email.