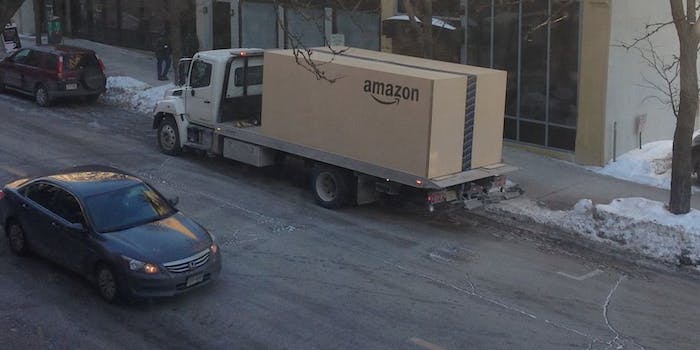 Amazon could start delivering your stuff before you even order it

In 2012, YouTube comedy group The Bilderbergers released a popular animated sketch called “Amazon Yesterday Shipping,” an extended joke about Amazon.com delivering the things you want before you even order them.

And while Amazon still hasn’t perfected time travel, the company now owns a patent for “anticipatory package shipping,” a system that predicts what you’ll order and sends it to an Amazon facility near you, rerouting it to your address as soon as you click to pay.

The Wall Street Journal reports that Amazon sees shipping time as the main reason people still purchase brick-and-mortar stores. The predictive shipping system is a way of snagging customers before they leave the house to visit Amazon’s competition.

The system will rely on all the data you’re already giving Amazon every time you shop, including “previous orders, product searches, wish lists, shopping-cart contents, returns and even how long an Internet user’s cursor hovers over an item.”

There’s no word on when the technology will go into effect (or whether it already has), and Amazon hasn’t released an estimate of how much it’s expected to cut down on delivery times.

Amazon has been focused on faster deliveries in recent months. In December, it generated a ton of buzz by proposing a system of package-delivering flying drones.