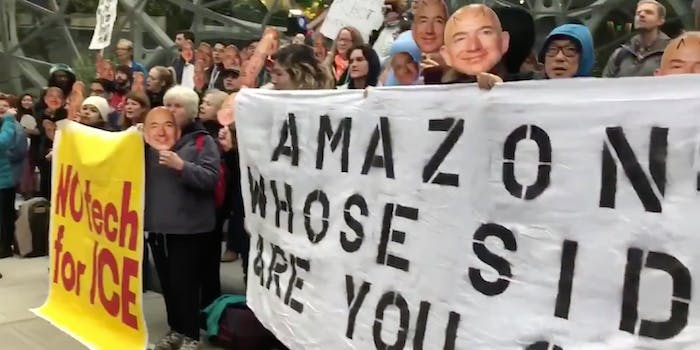 A group of protesters rallied at Amazon’s Seattle headquarters on Wednesday in response to reports that the tech company has sold its facial recognition technology to police and has been negotiating possible sales of the tech with Immigration and Customs Enforcement (ICE), Gizmodo reports.

The Daily Beast reported last week on documents that revealed Amazon was in talks to sell its facial recognition technology,, called Rekognition, to ICE, raising concerns about how it could be used to target undocumented immigrants.

In response, Latinx rights group Mijente and Northwest Detention Center Resistance (NWDC) showed up Wednesday in front of the company’s headquarters sporting masks with the face of Amazon CEO Jeff Bezos. The organizations said on social media they were protesting the retail giant’s ongoing attempts to sell facial recognition software to law enforcement.

What's Scarier than Amazon? Amazon is pitching their facial-recognition system “Rekognition” to ICE for targeting immigrants. We're wearing Bezos masks outside of Amazon HQ in Seattle today to call on Amazon to stop selling tech to ICE #NoTechForICE https://t.co/YeRdlLJc5t

In an op-ed posted to Medium on Oct. 16, an anonymous employee stated that 450 Amazon employees issued a letter of concern to Bezos over Amazon’s sale of Rekognition to police and its cloud service contracts with the Department of Homeland Security.

“We know from history that new and powerful surveillance tools left unchecked in the hands of the state have been used to target people who have done nothing wrong; in the United States, a lack of public accountability already results in outsized impacts and over-policing of communities of color, immigrants, and people exercising their First Amendment rights,” the employee wrote.

The American Civil Liberties Union has previously criticized Amazon’s Rekognition program for its flaws and the potential harm of incorrectly identifying people as criminals.