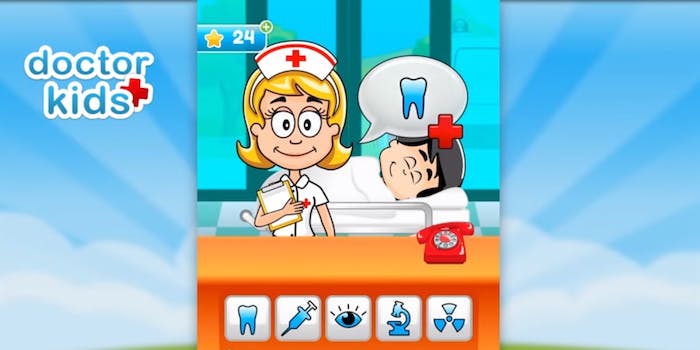 Children are being targeted by manipulative ads on their apps

A study recently published in the Journal of Developmental & Behavioral Pediatrics found that apps aimed at children 5 years old and younger are targeting them with manipulative ads. Phone games that are often touted as “educational” are employing questionable tactics to get kids to watch ads. Methods include disguising ads, mislabelling games as educational, and using characters to entice kids into making in-app purchases.

These tactics seem to be intended to trick young children into making purchases, and potentially make them more vulnerable to data breaches. The study prompted 21 child advocacy groups to sign a letter asking for an investigation into the products in question.

“These apps routinely lure young children to make purchases and watch ads, though they are marketed to parents as appropriate for young children,” the letter reads. “As the research makes clear, these practices are unfair and deceptive to children and parents, and we urge the FTC to take appropriate and swift action.”

The letter also cites the portion of the study which looked at how in-game characters could manipulate young children into making purchases. In “some cases, app characters showed disapproval of the user or an important mission (such as rescuing characters) could not be accomplished without a purchase, which may also lead children to feel an emotionally charged need to make purchases.”

The study, led by professor of pediatrics Jenny Radesky of the University of Michigan, found that nearly all of the 135 kids apps examined had ads. All of the free apps contained at least one type of advertising, as did 88 percent of paid apps. The type of ad varies between banner ads and traditional ads to camouflaged ads. Camouflaged ads are made to look like they belong in the game, but actually prompt ads when clicked.

BuzzFeed spoke with the executive director of the Campaign for a Commercial-Free Childhood, Josh Golin.

“What we’re hoping is that the FTC will fine the app developers and fine them enough that it sends a clear message to the preschool app industry,” Golin said. He and Radesky agreed that Google and Apple, along with other platforms, have a gatekeeping role to play. Though both have supposedly strict rules regarding games aimed at children, several have slipped through the gaps and reached numerous kids.

The major concerns, apart from exposing children to inappropriate content and manipulating their developing emotions, is privacy. Kids, of course, have no concept of why they may need to protect private information, which puts them at major risk. Thousands of apps may violate the Children’s Online Privacy Protection Act (COPPA), which limits the information that “operators of websites or online services directed to children under 13 years of age” can gather.

Kids, particularly in the very young age group this study focuses on, are vulnerable to this type of manipulative advertising.