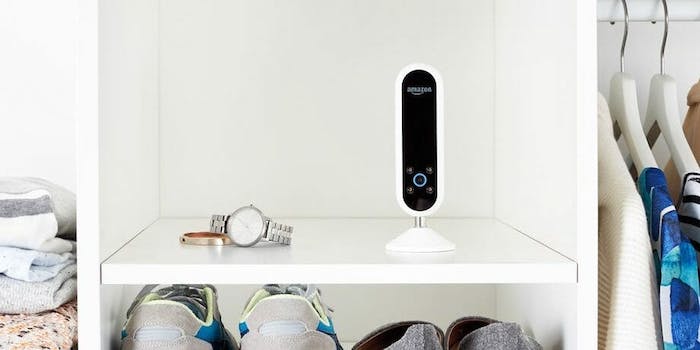 This new camera-wielding Alexa device could live in your closet—but are your photos safe?

The Alexa family expanded this week, and not just in number. Unlike its predecessors though, the new Amazon Echo Look doesn’t just listen in for audio commands—it has a camera and can snap photos and video.

Priced at $199.99, the Echo Look is targeted specifically at fashion-focused ladies and gents (but probably mostly ladies). Using just your voice, the product description reads, you can snap full-length photos and short videos with a hands-free camera. You can then turn those photos into a personal lookbook or get second opinions from a machine learning-based service called Style Check. You can also discover new brands and styles that you might enjoy. It’s kind of like having a robotic personal stylist living in your bedroom.

In addition to the onboard depth-sensing camera, the device has built-in LED lighting to illuminate your shots. It also uses computer vision-techniques to add some background blur to your pics (the better for hiding the pile of clothes on the floor behind you).

In one respect, the Echo Look is a pretty cool-sounding device. Who wouldn’t—at least, occasionally—want an instant, unbiased fashion advice without needing to leave the bedroom? And if Alexa’s going to listen in to your commands and queries, she’s just at home in your bedroom as your living room or kitchen.

However, now, this Echo isn’t just listening to your every word (an issue that’s led to problems for people named Alexa, as well as viewers watching TV or radio segments about the device). It can also watch what you’re doing, too. And that introduces a whole new set of problems.

As Wired points out, the Echo Look doesn’t come with any guarantees that the device will only stick with its fashion-focused abilities in the future. While Amazon confirmed that the gadget’s machine learning algorithms will be limited to identifying outfits—not anything else it sees in the shot, such as your face or the rest of your room—it doesn’t have a concrete policy about data collection or user privacy, here.

“Those who choose to use this technology can’t and shouldn’t expect 100% privacy,” Naked Security’s Bill Brenner kindly reminds us in a blog post about Amazon Alexa security back in January.

And while the photos you snap with the device may be innocuous, that doesn’t mean they couldn’t be used to more malicious ends in the wrong hands.

“Many people aren’t aware of the metadata associated with every photo taken,” says Zouhair Belkoura, co-founder and CEO of Keepsafe, an app for private photo storage. Photos taken with your phone (or, potentially, by a connected device such as an Amazon Echo) typically contain a geo-tag that captures the location as well as the time and date a picture was taken. “It’s not complicated for a hacker or even a company to piece together your identity and personal history from a single photo, much less a series of them.” (Particularly, when AI and image search technology enter the picture.)

The good news is that Amazon does have a few safeguards in place. If the device is functioning properly, you’ll get an audio countdown and visual cues before it snaps a photo, according to Amazon’s FAQ on the Echo Look. You can also press a button on the side of the device to ensure both the mic and camera are switched off. And through the Look’s partner app, you also have the ability to delete photos at any time.

An Amazon representative also told the Daily Dot about other measures the company has taken as well. This includes disallowing third-party application installation on the device, rigorous security reviews, and encrypting images and communication between Echo Look, the Echo Look app, and Amazon’s servers.

On top of that, Gary Davis, McAfee’s chief consumer security evangelist, recommends connected home device owners do two things to protect their connected gadgetry: change the default password when you install the device (which will make it “extremely difficult to target that device,” he says, as long as you use a difficult-to-crack password) and apply any patches to the device that the manufacturer publishes ASAP.

The Amazon Echo Look is available by invitation-only right now. If you want to give it a go, you can request yours here.