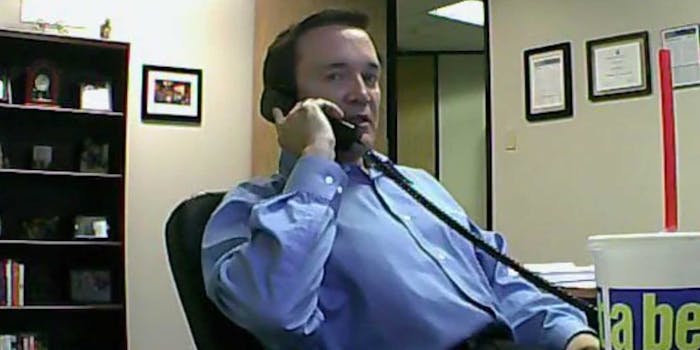 A master troll provides a perfect soundtrack for his invasive prank.

You have to give the hacker behind the YouTube account IPCamLeaks some credit: As annoying as it must be to have someone remotely break into your webcam, ostensibly to teach you a lesson about computer security, some of his pranks are really on the nose.

Take the latest escapade, in which an office employee is so baffled by the intermittent bars of The Police’s ultra-paranoid 1983 single “Every Breath You Take” issuing from his wireless IP camera that he’s eventually forced to call Insteon tech support—which isn’t all that helpful. Naturally, we get to observe all the confusion from the POV of the hacked camera itself.

“On one of more occasions i have been able to make people think a house/room/office is haunted by accessing devices with two-way audio capability,” the hacker boasts on his YouTube page, “but in the end i usually let the owner know there is a security problem with the camera being open to the internet without password protection. Some are thankful that i let them know, some laugh in relief that there house is not haunted, some get very very angry and call the cops, FBI or Foscam tech support.” When our victim does finally make the latter move, he’s well aware of the “freaky” message being relayed: “That’s that song where someone’s watching you,” he explains to the Insteon employee, looking rather worried.

The breach in this case almost certainly stems from the customer’s admitted failure to update the default security settings on the rarely-used camera, leaving himself vulnerable to any online mischief maker capable of typing the words “Admin” and “Password.” Perhaps he’ll be more careful in the future, but until then, Sting ought to be able to keep very close tabs on him.