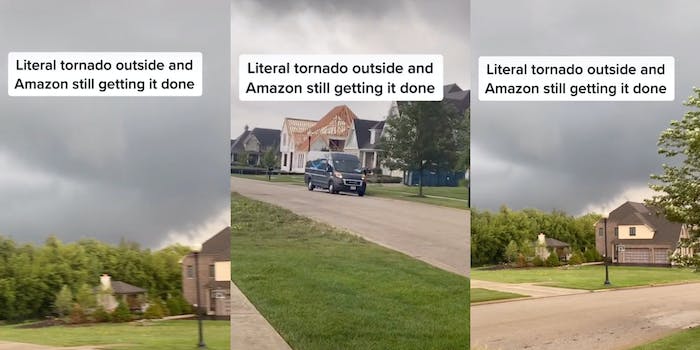 ‘He don’t get paid enough for that’: Viral TikTok allegedly shows Amazon driver making deliveries while there is a ‘literal tornado outside’

'Amazon does not care about its drivers.'

Working conditions for Amazon employees have been a topic of conversation for years.

Many believe Amazon employees are overworked, underpaid, and severely under-appreciated, leading to backlash among consumers and employees. Conversations surrounding Amazon working conditions are typically sparked by viral examples, like a recent video that appears to show an Amazon delivery driver hard at work despite a brewing storm that one TikToker claims was on its way to becoming a “tornado.”

Set to Bo Burnham’s popular track “Bezos I,” the brief clip from user @ajp18588 sees an Amazon delivery truck making its way through a nice-looking neighborhood. The sky above is grey and dark, with angry clouds forming in the near-distance. As the camera hesitates on one portion of sky, an even darker portion can be seen, which the TikToker alleges, via a comment, is a “rain-wrapped” tornado.

“There was absolutely a tornado there, you just wouldn’t be able to see it until it was right on top of you,” the TikToker wrote.

The video is captioned with an apt assessment of the situation, noting that there is a “literal tornado outside” but “Amazon still getting it done.” The poster, who goes by Antonio on the platform, additionally noted that “Jeff B running a tight ship” in the video description.

The video is one of the most popular on Antonio’s page, with more than 1.5 million views and several thousand comments. People flocked to the comments section to crack jokes about Amazon working conditions and to drag Bezos, who’s net worth grew to a staggering $190 billion during the COVID-19 pandemic.

Numerous commenters jokingly noted that “no one can stop Amazon” and poked fun at our collective obsession with “same day delivery.”

“When they say one day delivery they mean it,” one commenter joked.

A number of viewers struggled to see the tornado and questioned if the weather was really as bad as Antonio claimed. Several commenters with tornado experience seemed to confirm Antonio’s claim, however, with one noting “that there is a funnel. A forming tornado.” Several tornados were, indeed, reported in Illinois—where the video was reportedly taken—around the same time the video was posted, in early August.

Even those who didn’t believe a tornado was imminent still empathized with the Amazon driver. “Why is he out there? I know he don’t get paid enough for that,” one said.

“Amazon does not care about its drivers,” a second alleged.

The Daily Dot reached out to Antonio and Amazon.