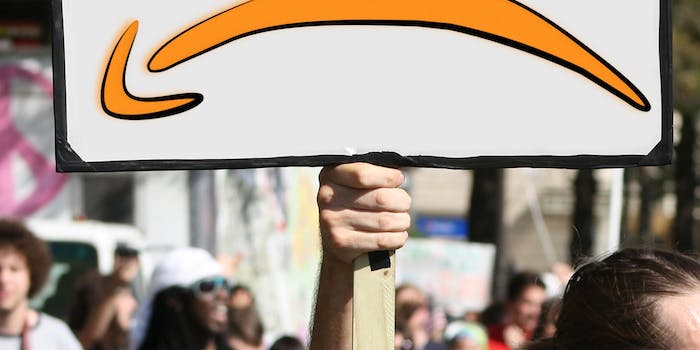 A group of activists in England are carrying out a series of protests aimed at forcing Amazon into changing its working conditions.

The net isn’t exactly closing around Amazon, which recorded over $60 billion in sales last year, but a network of activists known as Amazon Anonymous (A.A.) is hoping to cast it this week in the U.K.

On Thursday, the group will launch its biggest action to date by flooding the email inbox of an Amazon employee. The mass email repeats demands that the company pay a living wage to all of its workers—an index above the minimum wage that takes into account the true cost of living and accounts not just for full-time staff but temporary contract workers as well.

“This woman will never have had the spotlight shone on her like this before, because she’s a total random in employee relations,” says Amazon Anonymous founder Emily Kenway.

The woman in question isn’t actually a “random” employee. The target replied to A.A. on behalf of Amazon U.K.’s Managing Director Christopher North, after 55,000 people signed Kenway’s petition on Change.org earlier this year. That effort, directed at Amazon CEO Jeff Bezos, demanded the company pay its workers a living wage, which the group claimed would potentially improve productivity and reduce absences.

A world away from the hacktivist collective Anonymous, Kenway, a 28-year-old former opera singer, has more in common with the original leadership of the Occupy Wall Street movement. She dresses in smart office wear and conducts media interviews in her lunch hour from her job as a project manager for a charity in central London. Kenway was actually one of Amazon’s customers until the end of 2013, when in the space of a week, BBC Panorama and the Guardian released reports from undercover journalists in the company’s warehouses, showing the totalitarian levels of control the management exerts over workers.

“I got really angry, because I’d been giving my money to this company and I did not know it was behaving like that. It outrages me,” recalled Kenway, who didn’t actually stop to eat or drink in her lunch break. “I know a lot of people who started boycotting it over tax. But for me, it’s the human stories.”

The reports showed workers under immense physical strain. Some employees were walking as much as 11 miles per shift, and even the toilet breaks were closely monitored in an effort to increase productivity. The Guardian report revealed how one woman was given a “point”—receive three and you’re canned—for calling in sick after twisting her ankle while working. Amazon UK did not respond to the Daily Dot’s request for comment for this story.

According to Martin Smith of the G.M.B. union, which supports A.A., as many as 90 percent of workers in the company’s U.K. distribution centers at any one time are on temporary contracts, which are often terminated after three months then renewed again. This prevents workers from accruing employee benefits, keeps them in a constant state of insecurity, and often leaves them quite literally out in the cold. 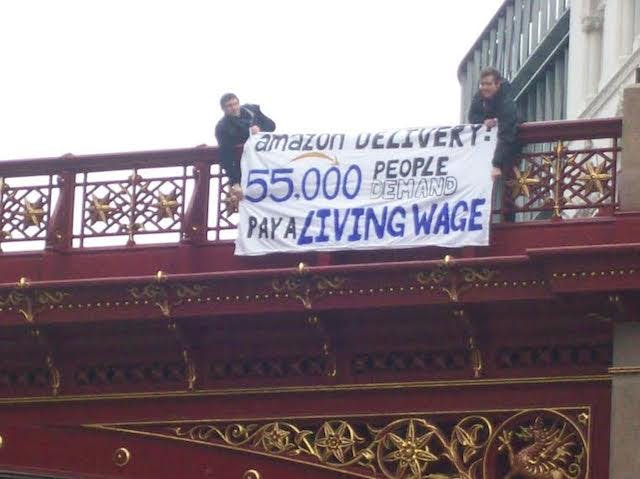 “We had zero hour contracts,” a former worker testified to the A.A. “Sometimes you were told just to go home without pay after waiting around for up to a couple of hours with nothing to do. And if you had no lift you have to wait until the end of the day for the work bus or a lift.”

Inspired by the reports, Kenway created the online petition in December 2013. As well as demanding that Amazon pay all its employees the living wage, currently £7.65 (equivalent of $12.67), it also raised awareness for some of the company’s reported policies, including the monitoring and timing of toilet breaks, compulsory overtime, and a ‘performance console’ that tracks and logs workers’ activities so they can be released if their ‘pick rate’ is too slow.”

In February, Kenway and a band of other activists handed the petition into Amazon’s U.K. headquarters in London, with 55,000 signatures. Amazon was compelled to issue a response.

“We value all of our associates greatly and want to ensure that they remain with Amazon for many years to come,” says the letter to A.A, dated March 19. “We aim to provide our fulfilment centre associates with a competitive pay and benefits package. Permanent UK associates start at a minimum of £7.10 per hour increasing to a median of £8.00 per hour after 24 months.”

A.A. counters that £7.10 is below the living wage, and that the benefits package doesn’t apply to the company’s thousands of non-permanent workers.

If 55,000 signatures wasn’t enough to make Amazon change its tune, it’s hard to image a spam email campaign would be much more effective. But Kenway insists that larger efforts are in the works, and she has significant partners in the effort. Martin Smith, the national organizer for GMB, Britian’s general union, and Tim Hunt of Ethical Consumer make up the core of A.A.’s organization structure.

Along with its outside protests, A.A. also plans to get more workers signed up to the GMB union, which boasts over 700,000 members. However, Amazon’s anti-union stance is well documented—unions aren’t allowed to operate inside the company’s workplaces in the U.K.. Smith says that interested workers have to meet in secret for fear of being fired for their suspected union ties.

A.A. also aims to inspire convince customers to boycott Amazon, but it’s not going to be easy. Even the company’s fiercest critics concede that Amazon produces fantastic customer service, combined with low prices and convenience that’s often difficult to beat. Plus, Amazon is planning to double its U.K. warehouses to 16 in the next three years, bolstering its stronghold in the area.

The goal for A.A., however, is to get people to see the hidden costs of those cheap prices.