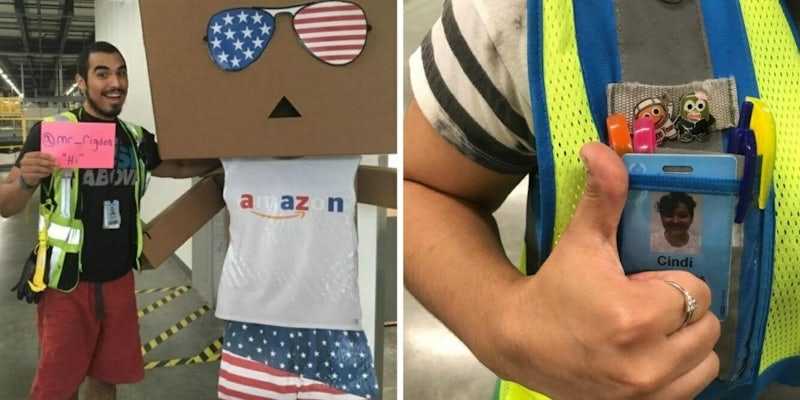 Working for Amazon is pretty great, according to the people being paid by Amazon to tweet that.

Carol is a Pick Department associate and a process trainer at an Amazon warehouse in Kent, Washington. To Carol, “family is everything,” and she loves classic rock and classic cars.

Jeremy is into “cats, sports, anime, and video games,” and he works the overnight shift for Amazon in San Marcos, Texas.

Misty is an Amazon inbound dock problem solver in Etna, Ohio. She has two grandkids, and she proclaims that “crochet is my calm.”

What do all these Amazon employees have in common? They’re all completely new to Twitter and a part of Amazon’s ambassador program that is trying to make the mega-company more relatable to the public. They’re extolling the company line in virtually every tweet they write, and they’re trying their best to give off a vibe that working at Amazon is an amazing experience. Meanwhile, these Twitter accounts have given off a dystopian world/Stepford Wives vibe that has made the internet a little uneasy.

The @bornwithatail_ Twitter account might have been the first to notice that Amazon has initiated more than a dozen of its workers into the Twittersphere in an attempt to defend the company against everything from poor wages to not allowing its employees time to use the bathroom.

So Amaz*n has set up an army of bot accounts, allegedly from workers at various fulfillment centers, whose sole purpose is to jump on tweets critical of their benevolent overlord with the same stale cant about great pay & benefits pic.twitter.com/Z7lJWUb7A0

And what are they tweeting? That life at Amazon is pretty great.

The financial competition is pretty great.

The bathroom breaks are pretty great.

And the fact that nobody is dying on the job is pretty great.

According to TechCrunch, there are at least 15 of these accounts who are being paid to spout the company line.

It’s been previously reported in the past few years that Amazon warehouse workers are often tasked to do intensive, laborious work in intolerable conditions and to move as fast as humanly possible.

There’s little doubt the company needs continuously good PR. In February, Amazon was granted patents for a tracking device that could show management exactly where their workers are and what they’re doing—again, it’s another look into a possible dystopian worker landscape. There was a troubling report earlier this year that a number of Amazon workers have to use food stamps because Amazon’s wages are too low, and there was another report that stated workers urinate in water bottles because they feared facing discipline for taking a bathroom break.

Amazon didn’t answer Daily Dot questions about how often and what these ambassadors are supposed to be tweeting about and if the company was worried about them being labeled Twitter bots by other internet users. But in a statement, a spokesperson told the Daily Dot that the ambassadors are employees who have worked in Amazon fulfillment centers.

“The most important thing is that they’ve been here long enough to honestly share the facts based on personal experience,” the spokesperson said. “It’s important that we do a good job of educating people about the actual environment inside our fulfillment centers, and the FC ambassador program is a big part of that along with the fulfillment center tours we provide.”

So far, though, much of the internet is skeptical.