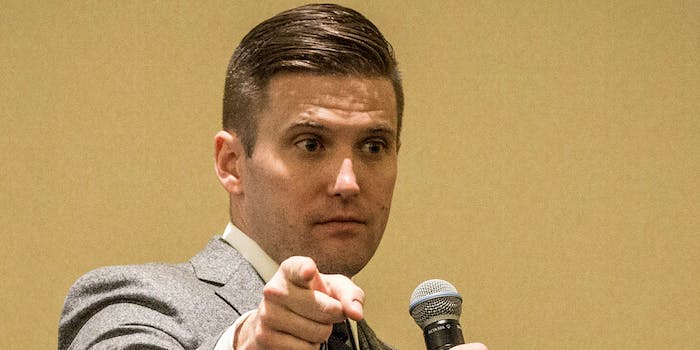 AltRight.com, the website associated with white nationalist Richard Spencer, has been shut down after a complaint from a legal nonprofit alleged it was used to incite violence.

Last month, the Lawyers’ Committee for Civil Rights Under Law, a legal non-profit, sent a letter to GoDaddy, the host of the website, saying that AltRight.com violated the company’s terms of service.

The group pointed specifically to a post made in January 2016 where they said an AltRight.com article said live ammunition should be used at the country’s southern border to create a “substantial chance that they [immigrants crossing the border] lose their life in the process,” according to the letter.

“By promoting illegal and violent acts in its articles, AltRight.com’s content has an impact beyond its published articles and encourages a downward spiral of violent and threatening posts in its comments section,” the letter reads.

GoDaddy told BuzzFeed News that they told Spencer, who gave speeches at colleges last year prompting extreme backlash, had 48 hours to move AltRight.com before it would be taken down. Spencer was also a prominent member of the white nationalists who rallied in Charlottesville, Virginia, last year.

“In instances where a site goes beyond the mere exercise of these freedoms, however, and crosses over to promoting, encouraging, or otherwise engaging in specific acts of violence against any person, we will take action,” GoDaddy told the news outlet. “It is our determination that Altright.com crossed the line and encouraged and promoted violence in a direct and threatening manner.”

In a statement, Kristen Clarke, the president and executive director of the Lawyer’s Committee for Civil Rights Under Law, said websites like AltRight.com “fuel racial violence and dangerous white supremacist activity all across our country.”

“Richard Spencer’s site, Altright.com, was a primary feeding ground for white supremacists that promoted violence against minorities and others,” she said. “Following our action and GoDaddy’s decision to terminate domain registration services, white supremacists who frequented Richard Spencer’s website won’t find it as easy to carry out their dangerous and violent activities.”

Spencer hasn’t directly commented on the closure of his website on Twitter, but has retweeted several people who claim GoDaddy was censoring free speech.

You can read all of the Lawyer’s Committee for Civil Rights Under Law’s letter here:

Letter to Richard Clarke, Altright.com by The Daily Dot on Scribd